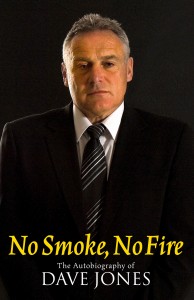 Dave Jones’ dramatic life story, on and off the pitch, is to be fully told for the first time in his impending autobiography, No Smoke, No Fire.

The £17.99 hard-back is described as a ‘no-holds-barred’ account of the ultimately successful battle the former Wolves manager fought to clear his name after allegations of child abuse in 1999.

The matter cost him his career as a Premier League manager at Southampton and, the publication argues, claimed the life of his father.

Jones, now 52, had to go to court to prove his innocence and the book’s title is based on the words of Judge David Clarke following the collapse of the Prosecution’s case in December, 2000.

“This is closure for the Jones family,” said author Andrew Warshaw, who has spent countless hours with the Cardiff manager and his wife Ann in seeing through the project.

“It’s his chance to put the record straight and right the wrongs against him. Some vile abuse has been aimed at him and his family at various times and people who read his account will appreciate the injustice of it and the effect on those around him.”

No Smoke, No Fire is due out at the end of June, after which Jones will be re-visiting Wolverhampton for media interviews and signing sessions.

He served at Molineux from January, 2001 to November, 2004, taking the club into the Premier League for the first time and so succeeding where Graham Turner, Graham Taylor, Mark McGhee and Colin Lee had all failed.

The sizeable section Jones devotes to his time at Wolves includes the revelation that he was sent to the wrong address in London for his first interview!

And there’s an insight into his anger at learning that some of the players he inherited had arranged to go on holiday to Las Vegas almost straight after the end of the regular 2000-01 programme – at a time when he still had designs on them playing in the play-offs.

Since leaving the West Midlands, Jones has taken Cardiff to Wembley for the first time in 71 years in the 2008 FA Cup final and to the brink of this season’s Championship play-offs.

Andrew Warshaw is a London-based freelance journalist who has known the Liverpudlian for many years. His publishers are Know The Score Books, the company who also brought out The Doog (by David Harrison and Steve Gordos) last year as well as another Wolves title, Match Of My Life.