Update In Print On Promotion Triumph 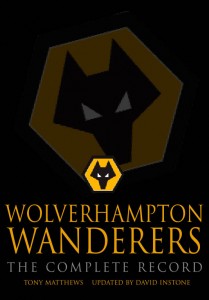 Breedon Books are giving a major post-promotion makeover to what already stands as the most comprehensive publication ever produced on Wolves.

The Derby-based publishers are including a new front cover in their updating of Wolverhampton Wanderers: The Complete Record.

The title came out last summer but has been revised with the help of www.wolvesheroes.com to take in the club’s historic 2008-09 Championship-winning campaign.

As well as a lengthening of the substantial feature on Mick McCarthy in the managers’ section, there is now a piece on Player of the Year Kevin Foley alongside the likes of Sylvan Ebanks-Blake and Wayne Hennessey in the area dedicated to 100 Wolves Stars.

And, of course, the promotion-sealing home win over QPR in April becomes an additional Match To Remember.

The entire triumphant season is laid out match by match, in the style of the rest of the book, with line-ups, scores, scorers and attendances included along the way.

The £19.99 hard-back, written by prolific historian and author Tony Matthews, is due out in August to coincide with Wolves’ return to the Premier League.

Fans will be able to purchase from Wolves, Breedon Books, many High Street outlets or from Thomas Publications.

Also on the way, a few weeks sooner, is We Shall Not Be Moved, a 164-page book produced by the club to celebrate the promotion success.