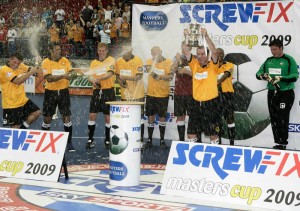 Wolves were celebrating again last night after once more winning the Midlands Masters title at the National Indoor Arena.

The side who emerged as national champions last year for the first time beat a star-studded Aston Villa line-up 2-1 in the play-off game and go forward to the grand finals in Liverpool.

“It was another great night for us but it doesn’t get any easier,” said skipper Mick Gooding, who had to nurse his way through the last couple of matches because of a muscle injury.

“We had to make a couple of changes from last year and saw some pretty big names in Villa’s squad, so it is a feather in our caps to beat them.

“Hopefully, we can now give another good account of ourselves when we defend our national title at Liverpool in a few months’ time.”

Wolves fell behind in last night’s deciding encounter but Don Goodman crashed them level just before half-time and Darren Roberts, a boyhood Villa fan, hit what proved to be the winner early in the second half.

Goodman, who then had a penalty saved, was in good scoring form throughout the evening – as well as combining playing with summarising duties on Sky TV.

He scored once and Phil Robinson twice in the opening 3-1 win over Birmingham before he, Roberts, Gooding and Robinson netted in a thrilling 4-4 draw with Villa, for whom Player of the Tournament Benite Carbone completed a hat-trick in his side’s late comeback.

Wolves were already assured of a top-two finish in the four-team group before they faced Albion, who registered their first points of the night by winning 2-1 with a deflected last-gasp Carl Heggs strike after Goodman had opened the scoring. 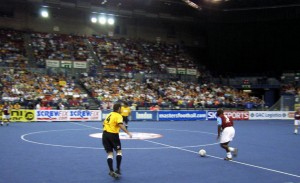 The finals night is at Liverpool’s Echo Arena on September 6.