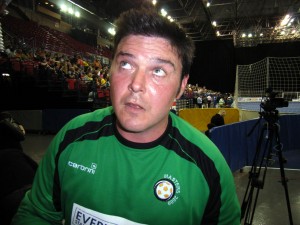 Andy de Bont - raised a few eyebrows at the NIA, including his own.

Andy de Bont will have to wait to see whether his heroics in Wolves’ latest Midland Masters triumph might earn him a place in their line-up on grand finals night in September.

He will also have to decide whether he wants to put himself through another three hours of pain!

The keeper, who played around 50 matches for Graham Turner’s Hereford after being released from Molineux in 1996 without appearing in a competitive first-team game, was one of the stars of Wolves’ success at Birmingham’s National Indoor Arena on Saturday.

But he was well down the pecking order and played only because a number of other contacted keepers were unavailable.

“Andy Thompson called me a couple of days beforehand, so I suppose I should blame him for how I feel!” De Bont said as Wolves’ champagne-soaked players retreated to their dressing room three nights ago.

“It must be nearly a year since I last played a game – for Wolves All Stars – and around four years since I played my last competitive match, for Willenhall.

“Have I enjoyed it? No! It was hard work and I had a real sweat on but of course it’s brilliant to come out as champions.

“And I was pretty pleased with how I did considering I was still wearing the same trainers that I had in 1996.”

De Bont, who still lives in Sedgley, wouldn’t have played had either Mike Stowell or Paul Jones been available – or if Michael Oakes had been able to turn out. 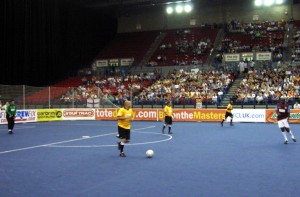 De Bont looks on as Scott Taylor takes the ball out of defence, flanked by skipper Mick Gooding.

Now he has to wait to see whether he receives the call for grand finals night in Liverpool on September 6.

“We don’t get the total say on who plays,” says Wolves skipper Mick Gooding. “It’s a difficult one because other keepers have done really well for us in the past but Andy was good enough to come and play on Saturday and he did brilliantly.

“I’d like to think we’d stay with the same team but we’ll have to see. There’s two and a half months yet before it comes round.”