From Italy With Love

Wolves Pals Turn Out For Mike 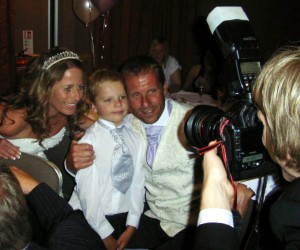 The happy couple, with Mike's youngest son William, in the spotlight on Saturday night.

Andy Thompson and Matt Murray were among the guests over the weekend at the reception that followed the wedding of former Wolves keeper Mike Stowell and England women’s international footballer Rachel McArthur.

Also present were Nigel Pearson, the manager of Mike’s present club Leicester, and Bristol City stalwart Clive Whitehead, who he worked with during his time at Ashton Gate.

The happy couple were married in Sorrento last Thursday, which might explain the bronzed looks on their wedding photos!

“More than 25 of us went over to Italy and it was a bit difficult logistically to then get home on Friday and finalise the arrangements for the do in Leicester on Saturday night.

“But everything went off well. We had a lovely turn-out of friends and family to round things off.

“It was a great season for me, with Wolves going up as well as Leicester. With the wedding now, it has been celebration all the way.”

Rachel is best known for her time with Fulham’s all-conquering ladies’ side and has also played for Arsenal and Bristol City as well as 14 times for her country.

The midfielder has recently been with Leeds but has played some games for Leicester, where the couple live, to assist her recovery from a cruciate knee operation. 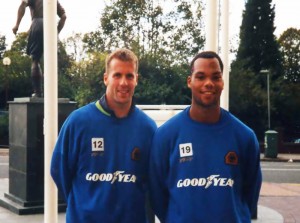 Stowell snapped outside Molineux by a fan, at a time when he had Joleon Lescott as a colleague.

And Mike also has a date with the surgeon looming. He is due to go into hospital for work on his knee in August and will be off the training ground for several weeks early in Leicester’s comeback campaign in the Championship.

Before then, he is due to go with the East Midlanders on their pre-season training camp to Slovenia.

He remains the man to have played more games in Wolves’ goal (441) than anyone else in the club’s history.