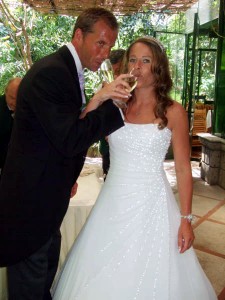 Mike Stowell has revealed details of a freak injury from his wedding festivities – but reassured Wolves fans that it wasn’t Matt Murray who suffered it!

The unlucky present-day keeper was among the gathering when his Molineux mentor celebrated with new wife Rachel in Leicester last weekend following their marriage ceremony in Sorrento two days earlier.

But Matt, who sensibly left the dancing to his young daughter while he continues to recover from his latest operation, had long departed the do when a fellow guest came to grief.

“One of Rachel’s football friends from London was dancing away and pretending to be a ballerina when her leg suddenly gave way beneath her,” Mike told us.

“She collapsed in agony and was found to have broken her tibia. The party went on after an interruption but she had to wait for a long while in the foyer of the hotel in a lot of pain before being taken off to hospital.

“She is to have an operation this week and we’re planning to go to visit her early next week and offer our sympathy before I’m back in with Leicester for pre-season training. 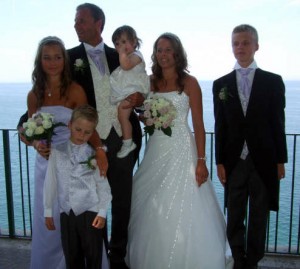 Not a bad place to get spliced! Mike and Rachel with the next generation of Stowells.....(in descending age order) Charlotte, Kieran, William and Ella.

“I know, with a party like this, people will assume it was a boozy accident but nothing could be further from the truth. The poor girl doesn’t drink at all!”

The incident was the second piece of misfortune to strike the newly-weds.

During their two-week trip to Italy, Mike’s youngest son William cut his chin going down a slide and required stitches.