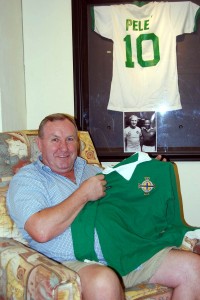 Dave Clements in recent years - in front of a photo and sartorial souvenir depicting a powerful memory.

In the list of players Wolverhampton Wanderers have allowed to get away over the years – and there have been a few, like Alan Ball, Bob Wilson and Charlie Nicholas – the name of Dave Clements figures high.

The Ulsterman was an apprentice at Molineux in Stan Cullis’ final season there and made it as far as Wolves’ reserve team.

But he was allowed to leave for the princely sum of £1,500 and so embarked on a long and successful first-team career that brought him well over 400 appearances across a decade and a bit with Coventry, Sheffield Wednesday and Everton.

There was also the matter of 48 caps for Northern Ireland – service that was clearly so highly valued that he later had an 11-game run as their manager, starting at the age of only 29.

Clements now lives in Denver and speaks with an American twang, not surprising as it was as far back as 1976 that he first decided to make the States his home when he became a team-mate of Pele’s by joining New York Cosmos.

So how did he come to leave Wolves at a time when their slide from greatness must have left them crying out for the sort of stabilising force he became?

“I was there in my late teens and was in digs with Peter Knowles that were run by a Mrs Southwick,” he told Wolves Heroes. “Another couple of lads were with us – Kevin McMahon and a Jim Conway or Conroy.

“I played a few matches in the reserves but more so for the youth team and A team and remember players like Ken Knighton, Terry Wharton and Peter Broadbent – and Ron Flowers, who was so kind in making me feel comfortable.

“I recall going to train at RAF Cosford because the weather was so bad in the winter of 1963 and, like all kids, I was hopeful of getting on at what was still seen as a big club.

“But I suppose Stan Cullis didn’t think I was going to make the first team, at least not in a significant enough way, so he decided to release me.

“He put a fee on my head, though, and Bill McGarry, who was then Watford’s manager, flew to Belfast to meet me and my dad.

“I was very close to signing but didn’t really want to be so close to London, so, when Jimmy Hill came in from Coventry, I went there instead – and Bill was none too pleased!” 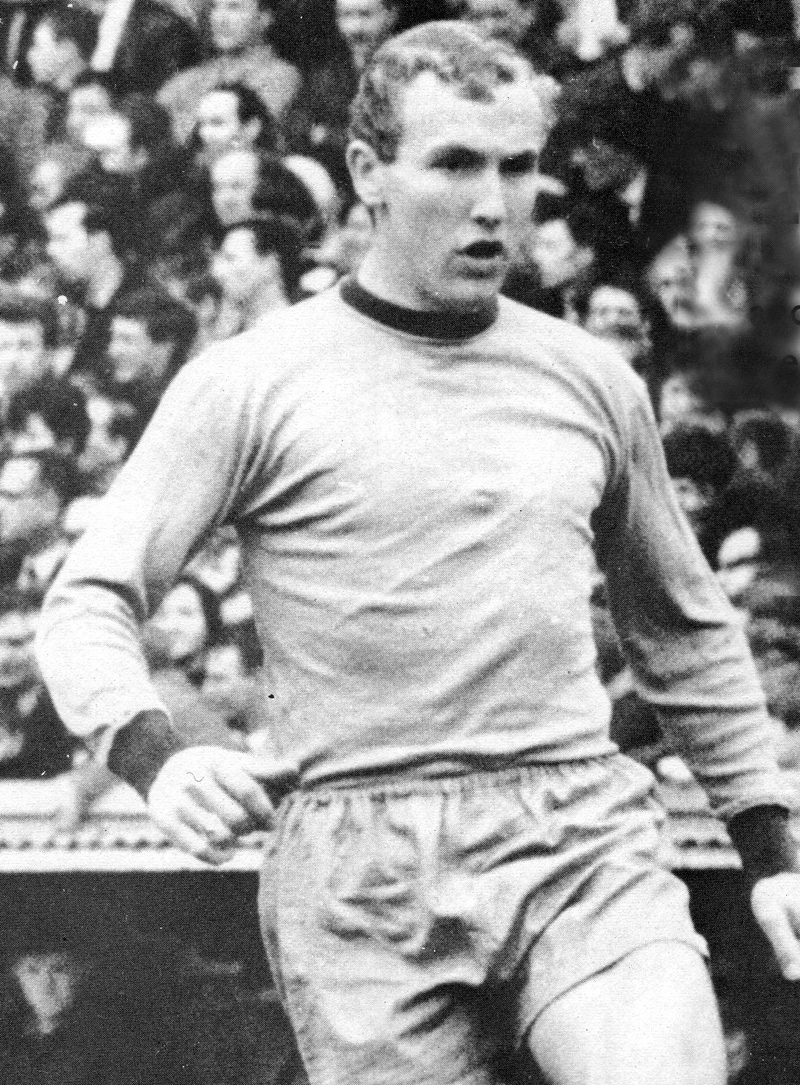 Clements, a left-footed utility man, was a big figure in the Highfield Road revolution, helping the Sky Blues to promotion above runners-up Wolves in 1966-67 and taking his appearance tally for them to 255 as they became established in the top flight.

Hill initially had the former amateur, schoolboy and youth international playing as a goal-scoring left-winger – a position that, at Molineux, was sealed off to all other pretenders by Dave Wagstaffe’s arrival. But that was after Clements had gone and Cullis had subsequently departed.

“It might have been different but I still look back on my Wolves time fondly – and this website has brought back some happy memories,” he added.

“I’m happy that I went on to have a good, long career in the game, in England and the USA, and remember going back to Molineux for my Everton debut (in a 1-1 draw in September, 1973) and crossing for Joe Royle to head in.”

Derek Dougan netted in the same fixture and criss-crossed Europe with the same Northern Ireland team as Clements for many years, the latter’s spell as player-manager starting as Belfast began to stage international matches again following a four-year gap brought on by political unrest.

More success was still to come his way but much further afield. Having accepted a lucrative offer to play with the Cosmos, he was selected for Team America against England, Brazil and Italy in the Bicentenary Cup.

Then he moved into coaching, serving Colorado Caribous, Denver Avalanche, St Louis Steamers and Kansas City Comets and being named US Coach of the Year in 1982 and 1987. But such heights are only part of his American dream.

Clements, now 63, sometimes gave the opinion in his playing days that he found the game as easy as taking sweets off a child. And, if that’s the case, it’s pay-back time now. 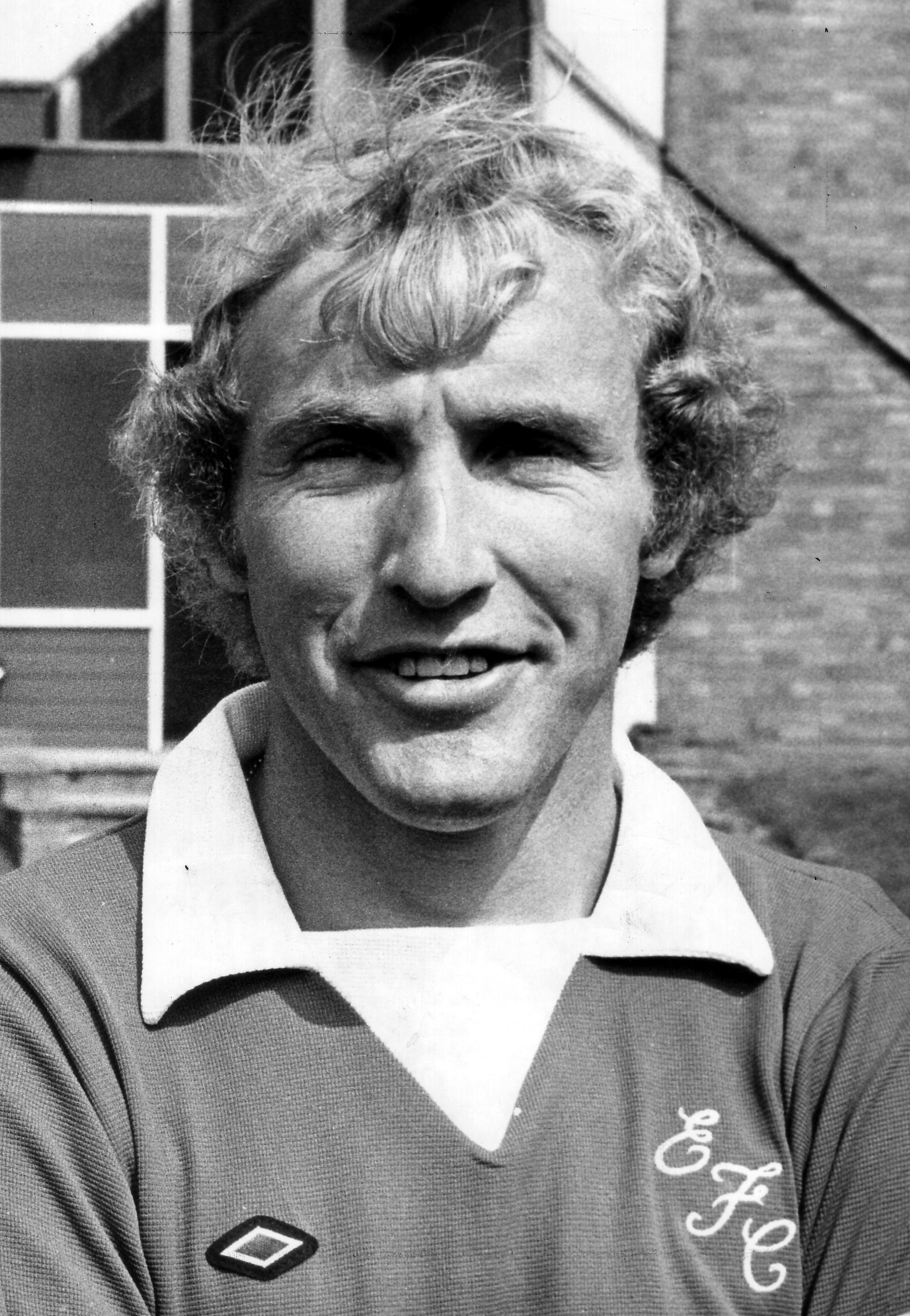 Clements in his Everton days.

Having run an Irish shop and worked as a salesman since he left football, he now runs the American arm of the business his brother-in-law set up five years ago; that of introducing the world’s only fully automatic candy floss vending machines.

“We’re trying to get into anywhere where kids are around and it has been going crazy,” he added. “We’ve had a TV feature on the business, Cotton Candy Vending, and we’re making the machines now in Chicago and other places, so life is still very busy.”