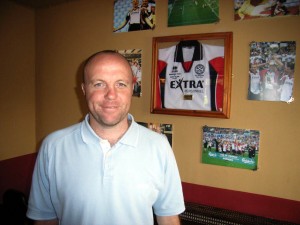 'Mine host' in front of the Chris Brindley wall at the Cross Keys pub in Hednesford.

Chris Brindley’s outstanding career in non-League football is no immunity against the difficulties now consuming him as Stafford Rangers manager.

Following his departure from Wolves in 1988 after only nine first-team games, the likeable central defender embarked on a long and successful stay outside the big 92.

But the financial difficulties that drove Steve Bull out of the Stafford hot seat in the middle of last season are still very much in evidence at Marston Road and life doesn’t get any easier for the man the legendary striker recruited as his no 2.

“I’m not sure Steve realised how difficult the situation was here and it’s got tougher since then,” Brindley said today, two days before his club start their 2009-10 Conference North programme at Hyde.

“We’ve had a poor pre-season and the budget has been cut again but I’m still hopeful of signing one or two more players who maybe found themselves out of the team at clubs they are currently at.

“I doubt it has ever been as tough at non-League level as it now is. As well as Bully, Andy Mutch quit as manager at Burscough towards the end of last season and others are working on reduced budgets.

“These are difficult jobs but you just hope you can get in there and make a difference, even though there’s a poll on the Internet guessing when I’m going to get the sack!”

He previously spent two years as a player at Stafford and had coaching and managing experience in a second spell with Hednesford before also serving Rushall Olympic as coach.

“I think I’m the only player to play in three Trophy finals for three different clubs,” he added. “I feel like I’ve been in non-League all my life because I was playing for Chasetown at 15 and Hednesford at 16 before being given my chance at Molineux.

“I joined Wolves about three weeks before Bully and made my debut at Hereford on Boxing Day in 1986.

“My best little run was probably when we drew at Preston later that season and then beat Colchester 2-0. But it was about 12 months before I played again – in a 4-0 win over Peterborough.

“If I’d been 21, I’d have knocked on the manager’s door to ask why I wasn’t playing but I was only in my teens and accepted for a while that I was standing in for the likes of Ally Robertson and Floyd Streete. 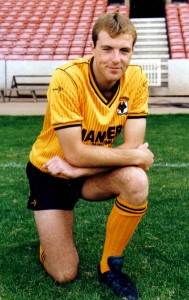 “I think Wolves would have kept me on but I needed to be playing, so I moved to Telford, believing that if I did well, I’d probably return to the League. But it never happened.”

Brindley, just past his 40th birthday, combines life in charge of Rangers these days with the role of manager at the Cross Keys pub next door to the site that used to house Hednesford’s ground.

Pictures of Andrew Flintoff, Muhammad Ali and the 1950s Wolves greats confirm the establishment’s strong sporting theme but mine host is also well justified in having the wall dedicated to highlights from his own career – largely in non-League of course.