PK Present As Old Pal Is Laid To Rest 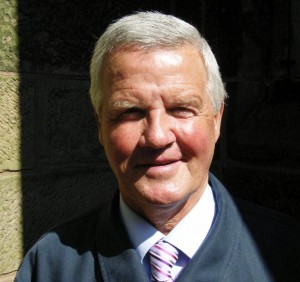 Peter Knowles was among the mourners at the funeral of former Wolves and England defender Bobby Thomson today.

The much-loved 1960s inside-forward is rarely seen these days among his contemporaries but turned up for the late-morning service at Sedgley’s All Saints Church and immediately mixed freely.

He also made a brief appearance at the buffet lunch put on by the family at the Cabin pub following a private burial ceremony at Penn Cemetery.

“Bobby was always calm and in control, and a very good player,” said Knowles in an exclusive interview for Wolves Heroes. “What’s more, I never heard him swear!

“I remember once we were worried about what Cliff Jones might do to us in a game against Tottenham but Bobby played him brilliantly.

“I played a lot of games with him at Wolves and also followed him into the England under-23 side, so we were good mates.”

Knowles’ appearance speaks volumes of the respect in which Thomson was held by his contemporaries.

Les Wilson had planned to fly in from Canada but has suffered two recent bereavements of his own and eventually had to send his apologies via Wolves Heroes, as did Dave Burnside.

BBC presenter Nick Owen was present on behalf of another of Bobby’s clubs, Luton Town, who also sent a wreath.

In his eulogy, Mike Bailey, captain to Bobby and numerous others in the congregation for many years, spoke of a ‘brilliant player who was very quick and read the game well.’

“He was ahead of his time, as good as (England 1966 World Cup left-back) Ray Wilson,” he added. “His record says it all: 300 games for Wolves, 15 for England under-23s (still a record) and eight for the full England team.

“Despite this star status, he remained modest and always had his feet on the ground. He never sought stardom. He was very much a family man. Football was his passion and relaxation but the family came first.

“In 1964, he and I were selected together to play for England versus the USA, not knowing we were to become team-mates for Wolves. 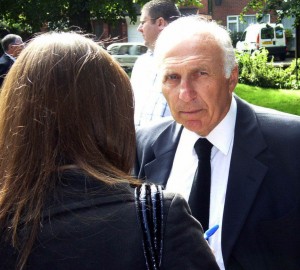 Skipper's duty......Mike Bailey is interviewed by an Express & Star reporter on arrival back in the West Midlands this morning.

“He was quiet in the dressing room and on the field. I never saw him lose his cool. He always remained dignified, was reliable with two good feet, and passed the ball simply.

“But, when he scored a rare goal at Oldham to keep us in the FA Cup in the last minute (in 1967), he ran the full length of the pitch to celebrate!

“Bob was a wonderful player, a model professional and a true gentleman who will be sorely missed.”

* Bobby Thomson died last week, aged 65. Wolves Heroes have already posted a full obituary and a separate article about him in our news area.