Bert Back In Wembley Spotlight

England Call For The Cat

Bert Williams saves when playing for an England World Cup X1 against the touring Canadians at Stamford Bridge.

Bert Williams will be among the VIPs at England’s home friendly against Slovenia on Saturday.

He has been invited to the new Wembley for the first time as part of an initiative involving team sponsors Nationwide and joked: “I just wish I was playing, not watching.”

The legendary Wolves keeper played 24 times for his country and, at 89, is believed to be the oldest of the survivors from the side who played in the 1950 World Cup in Brazil.

“I’m very pleased to have received the invitation, which came out of the blue,” he said today in an interview from his Shifnal home with BBC Radio Shropshire.

“Obviously, I played at the old ground many times but have never seen the new one except on TV. It looks very impressive, although I think they made a mistake taking the twin towers down.

“But having a roof that slides across and keeps the rain off the pitch is a good idea.”

Bert, who will also be attending a banquet at the game, had Wolves team-mates Billy Wright and Jimmy Mullen as England colleagues in the ill-fated World Cup campaign almost 60 years ago. 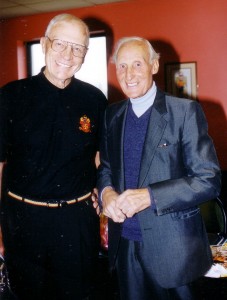 Bert (right), with Malcolm Finlayson, the man who succeeded him in Wolves' goal.

He achieved immortality when producing one of the best performances of his career in a 2-0 England win over world champions Italy at Tottenham in 1949 that was also marked by a rare goal by Billy – the second of only three he scored in his 105 caps.

Visiting journalists nicknamed Williams ‘Il Gattone’ (The Cat) at White Hart Lane, the nickname sticking with him over the years and forming part of the title of the outstanding pictorial book about his career that he brought out last year.

Bert also made 420 League and cup appearances for Wolves.