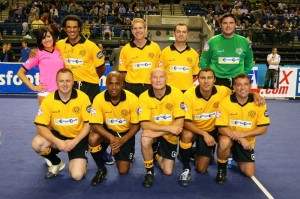 Wolves’ reign as Masters kings was ended last night by Tranmere Rovers, the side who have succeeded them as national champions.

A 2-1 defeat at the semi-final stage of grand finals evening at Liverpool’s Echo Arena broke their grip on the trophy after they had started brilliantly with a 6-1 trouncing of 2006 and 2007 winners Leicester.

Picking up where they had left off at the NIA in June, the Midlands Masters took the lead in the night’s opening game through a terrific early strike by Mick Gooding, the oldest player on view at the age of 50.

Wolves’ skipper added another but the main scoring honours went to Don Goodman, who hit a hat-trick, with Darren Roberts also on target after David Oldfield had pulled it back to 3-1.

Tranmere had breezed past the challenges of Liverpool and Everton in the Mersey Masters and earned the right for a crack at Wolves by beating Celtic 2-1 in the quarter-final.

They then took a two-goal lead in the semi through Ian Nolan and Stuart Barlow before Scott Taylor created room for a right-foot shot that made it 2-1 just before half-time.

And Wolves’ possession game, which has made them such a force in the tournament in the last three years, met its match in Tranmere, who had the advantage of heavy home-city support.

The Merseysiders, captained by Barlow, went on to beat Bolton in the final and so lift the Screwfix Trophy for the first time.

Last night’s tournament was an emotional farewell for Darren Roberts, who emigrates with his family to Australia in the next few days.