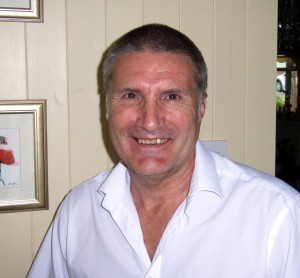 John Farrington has expressed his thanks to Wolves Heroes – for reuniting him with long-lost relatives he knew largely through his footballer father.

Our article on the 1960s Molineux winger last September popped up when his Northumberland-based half cousin Gillian Saunders ‘googled’ him recently in an effort to establish his whereabouts.

And we were delighted to put the two parties in touch for the first time in more than a decade and a half.

“My Dad, who played for Bradford City and guested for Middlesbrough during the war, was very friendly with Gillian’s Dad but we had not seen each other or spoken since the early 1990s,” Farrington said.

“It was probably at her wedding that we were last together but I lost my father in 1998, so it became much less likely then that our paths would cross.

“It’s lovely to have the chance to speak to her now and I’m sure we will stay in touch. Although we live in Leicestershire now, she lives only ten minutes or so from where I was born in Lynemouth, 20 miles north of Newcastle-upon-Tyne.”

Gillian, who first e-mailed us earlier this month, was delighted to have re-established contact with the man who played 38 times in Wolves’ first team and scored five goals.

“I was really excited to find this stuff about him,” she said. “I was telling my sister, who is a Newcastle fanatic, what I had found out about him on the Internet and we both thought it was amazing.

“He phoned over the weekend and I had a nice crack with him and his wife Maureen. Now we have each others’ numbers, we’re going to keep in touch and, when he comes up to the north-east again, we’ll meet up.”

Farrington, now 62, has recently been in poor health, with a bout of double pneumonia hospitalising him for several days last month.

As a player three and four decades ago, he was more fulfilled after leaving Wolves, the club he supported as a boy from 200 miles away. 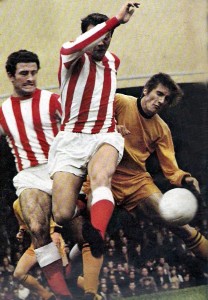 Farrington does battle with Sunderland defenders in September, 1968.

He had 118 League games with Leicester and a season at Cardiff, then played more than 250 times for Northampton, scoring over 30 goals.

And he no doubt owed a debt of thanks to his father Robert, who, having worked as a miner, might have joined Arsenal if the war hadn’t intervened.

“People used to tell me that Dad was quicker than me,” he added. “He was called the Stanley Matthews of the North, which is quite a compliment.”