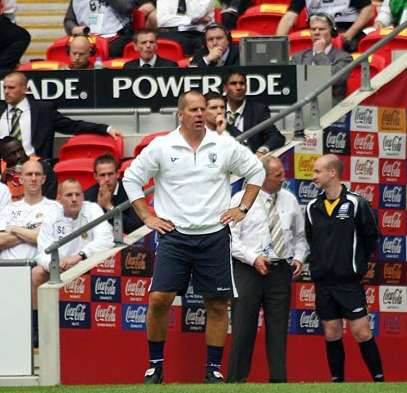 Scott Barrett in thoughtful pose during Gillingham's play-off final victory over Shrewsbury in May.

Despite his spectacular injury-time volley at Morecambe last weekend, Notts County’s Kasper Schmeichel didn’t quite emulate the feat of his more famous father as a goal-scoring goalkeeper.

The youngster grazed the bar with an acrobatic effort and is still waiting for his first senior goal – something his Dad, Peter, didn’t say for long as he netted for Aston Villa in the Premier League and Manchester United in Europe, as well as ten times in total for his Danish clubs Brondby and Hvidovre.

And he can look to former Wolves man Scott Barrett as an example of a keeper who certainly knew how to come up with an important goal.

No-one has ever scored in a League or cup game while keeping goal for Wolves, not withstanding Fred Davies’s effort in the 1967 USA Tournament, but Barrett developed a taste for scoring and creating after leaving Molineux.

When serving Colchester in 1991-92, the Ilkeston-born player netted a winning goal with a wind-assisted injury-time goal-kick in a Conference game against Wycombe.

The significance of his strike didn’t become clear until the end of the season when, having finished level on points with Wycombe, the Essex club were promoted on goal difference.

Not content with that, in the same season he ventured upfield for a corner in the dying moments of an FA Trophy first-hurdle tie at home to Kingstonian and headed on for Tony English to equalise. Colchester won the replay 3-2 and went on to lift the trophy.

“The goal-kick was just one of those things,” Barrett said. “It was in the winter months on a windy day and it just sailed over the keeper’s head. 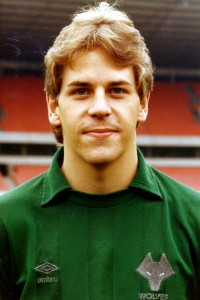 Barrett in his Wolves days.

“But I suppose it was quite revolutionary for that era when I went up for a corner in the Trophy tie. Keepers didn’t do that sort of thing very often then.

“About 20 seconds after the goal, the whistle went and we had another chance which we made the most of. And the fact that we went on to win at Wembley means it has been talked a lot about among Colchester fans since.”

Barrett, who played 35 times for Wolves in the mid-1980s, is now no 2 to Mark Stimson at League One club Gillingham.