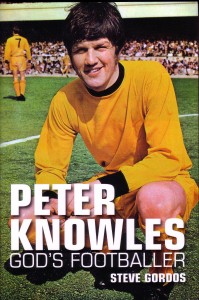 Steve Gordos’ affectionate biography of the player who quit Molineux for religious reasons has hit the book shelves.

Peter Knowles, God’s Footballer tells the remarkable story of how one of the most talented players from the post-1950s Wolverhampton Wanderers turned his back on fame and fortune in 1969 to become a Jehovah’s Witness.

The charismastic inside-forward, who turns 64 today, was hotly tipped to challenge for a place in England’s 1970 World Cup squad in Mexico when he walked away from the game for good in the autumn of 1969.

The club hoped and believed he would return and even hung training kit on his dressing room peg for the following Monday in anticipation, as well as re-registering him for several years in case he changed his mind.

But he stuck to his beliefs and the only occasions on which he again laced up his boots were to play in testimonial games for friends.

“As a relative youngster on the Express & Star sports desk, I remember Peter coming into the office to talk to our reporter John Dee and making it clear that he was going to retire from playing,” the author said.

“We ran a story on the front page saying he was having trouble allying his religious beliefs with his life in the public eye as a footballer.

“Bill McGarry had a go at us over the piece because he thought he was getting somewhere with trying to persuade him to carry on playing but it seems certain he was wrong.”

The Daily Mail reported this week how Knowles was angry at the publication of the 192-page story by Breedon Books which carries interviews from a host of former players as well as supporters.

“Peter was a hero of mine and I’m sad that he didn’t want to cooperate,” Gordos added.

“It’s a fabulous story…..imagine now if Wayne Rooney was to quit to become a missionary or something similar. 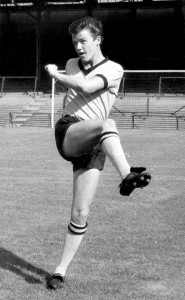 The man who broke thousands of hearts 40 years ago.

“The impact of his decision at the time was huge and is still talked about 40 years on. It would have been nice to put his point of view across because it’s certainly not a book that dishes the dirt on him.

“Who knows, he might have been the link that made the 1970s Wolves team strong enough to have won a few more trophies.”

Peter Knowles, God’s Footballer costs £16.99 and is available through Wolves’ retail outlets, in various high street locations and through us here at Wolves Heroes. Fans wishing to purchase us should hit the ‘Contact Us’ icon above in order to receive order details.