There’s No Substitute For Class

Slater’s Vision From Half A Century Ago 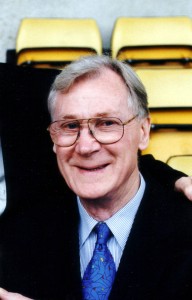 Bill Slater always exudes an air of quiet authority that makes him well worth listening to.

But it isn’t only in a post-playing career in sports administration that the former Wolves skipper has offered compelling thoughts.

And the on-going irritation felt around Molineux about damage to the good name of Norman Deeley has brought some of Slater’s opinions from almost half a century ago to the attention of Wolves Heroes.

This website have just been sent a 1960 article Slater wrote about substitutes at a time when he was not only skipper of the FA Cup holders but also Footballer of the Year.

It was compiled as Blackburn bemoaned their misfortune in losing their defender Dave Whelan to a broken leg suffered in a challenge with Deeley in their 3-0 Wembley defeat against Wolves – an incident about which the Wigan Athletic owner has repeatedly been outspoken in recent years.

But Slater addressed the bigger picture at the time by saying in the Empire News and Sunday Chronicle Football Annual: “When Whelan was carried off, it was a bitter blow to Blackburn and a big disappointment to Wolves. It took the edge off the contest.

“What can be done to ensure that, in the tense, nerve-testing atmosphere of the Cup final, the sides remain remain evenly matched in such a contingency?

“The obvious solution is to have substitute players standing by. I’m not at all sure that substitution would be suitable for League football, in which the twists of fortune over a long season invariably cancel themselves out.

“But I believe that, in the Cup, where so often success or failure hinges on one game, it might well be an important reform.”

It presumably now bemuses Slater, as it does many of us, that sides have no fewer than seven substitutes primed for action in league or cup games.

Of Deeley’s involvement in the Whelan incident at Wembley, his former team-mate Des Horne spoke up on his behalf as recently as last week on Wolves Heroes over the challenge that extended the so-called Wembley hoodoo – the sequence of finals in which sides had lost a player to serious injury.

Horne described the incident as ‘one of those sad things that can happen’ and so angry with Whelan is Western Australia-based Frank Roberts, the Wolves fan who sent us the Slater article, that he is pressing for the matter to be addressed in the coming months. 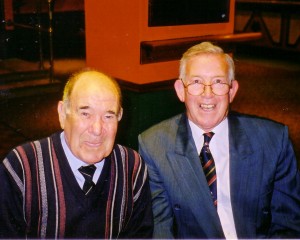 Norman Deeley, with his Wembley team-mate Peter Broadbent, in 2002.

Frank wrote: “I think Mr Whelan should make a retraction and restore Norman’s reputation, hopefully on April 24, 2010 – the day of Wolves’ home game against Blackburn.”

Interestingly, a picture he also sent of Whelan on the stretcher, with a clearly distraught Deeley nearby, carries the caption: “Norman Deeley is obviously upset but David Whelan turns to give him a reassuring word as he is carried off.”

* The first substitute used in an FA Cup final was Albion’s Dennis Clarke against Everton in 1968.