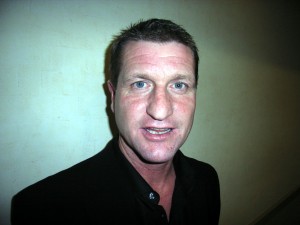 Andy Mutch has revealed the other life he led while Steve Bull was trying to crack it as an England player – he was often sprawled out on the Wembley touchline getting a close-up view!

The two strikers, best known for their rampaging days at the head of Graham Turner’s Wolves attack, had sharply contrasting roles on some of Wembley’s big nights two decades ago.

While Bull was building a 13-cap career highlighted by a place in the 1990 World Cup finals in Italy, Mutch happily settled for a position among the photographers behind the goal.

“One of my best mates is Bradley Ormesher, who I’ve known since we were at school together,” he said.

“He works for The Times now and has won Sports Photographer of the Year two or three times. But when he was in previous jobs, he used to have me sat down as his ‘runner’ at England games.

“I was there to help him if he needed it but there was also the enjoyment of seeing big matches from a different angle.

“At first, I had some funny looks off other photographers who perhaps thought they recognised me but they soon got used to me being there.

“I can’t say any of the players ever looked down, though, and spotted me while they were waiting for a corner to come across!”

Liverpool-born Mutch, now living in Southport and busy in various enterprises while he hopes for another opportunity in football management, has not just been among the ‘snappers’ at football matches.

He also attended one of Tiger Woods’s Open Championship triumphs and is proud to have been close to the world’s number one golfer in the press tent in his moment of glory. 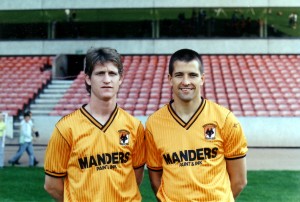 And with his much-photographed strike partner in the late 1980s.

“Bradley used to be the official photographer for Liverpool and has since had other jobs on national papers, so he’s well connected,” he added.

“And his photograph of me scoring for Wolves in the Sherpa Van Trophy final made the back pages, so that was lovely for us both.”