Fame Of The Fleeting Variety 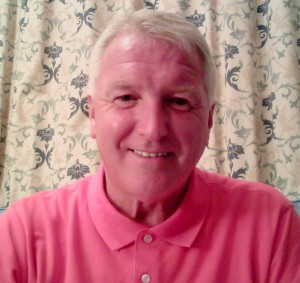 We at Wolves Heroes aren’t concerned only with the players who made a major first-team impact at Molineux.

There’s also room on this site for those who played bit-part roles – especially if they have an unusual tale to tell.

Ian Wallace, not to be confused with the ginger-haired striker of Coventry and Nottingham Forest fame, is one such character.

The wing-half, who turned 61 last month, made only one senior appearance for the club – and that was a four-minute outing at home to Blackburn early in the club’s 1966-67 promotion-winning season.

So how did a man who wasn’t even playing regularly in the reserves find a way in so briefly?

“The story started with Bobby Thomson falling ill after the pre-match meal – I think with blood poisoning – and Ken Knighton being drafted into the full-back position,” he said.

“I was taken off the bus that was about to leave for a third-team game at Castlecroft and told to get ready to be sub.

“I would love to have played the whole game and, who knows, it could have been the break all players dream of. My career could have taken off.

“The reality was that I got four minutes. I always say I had four kicks and three of those were on my calves from Ronie Clayton, the ex-England wing-half. Alas, that was as near as I got to the first team but I will never forget those four minutes.”

Some Wolves record books have Wallace down as being born in Hedley, Northumberland. He was in fact from Hadley just along the A5 and a Wanderers fan to boot.

“I would catch the train from Wellington on Saturdays to get to the ground with my two older brothers, who both supported Arsenal,” he added.

“I am born and bred in Shropshire and returned to work in Shrewsbury in 2006 after serving with the Ministry of Defence fire service in Cardiff, Bedford, South West Wales and Plymouth. But I was posted to Cyprus last October and we have rented our house in Apley until we return when I retire in October, 2011.

“I have yet to visit the ‘new’ Molineux but will do when I retire. And we look forward to playing again at Lilleshall Golf Club, where my wife and I have retained our memberships.”

Wallace, whose shock promotion for the 4-0 win over Blackburn was referred to by the two-goal Ernie Hunt in his Sporting Star column the following week, had played in Cardiff’s junior teams before joining Wolves in 1966.

He returned to his wife Gaynor’s home city when released at Molineux and played for Barry Town and Gloucester City before seeking steadier employment.

Now Command Fire Officer Cyprus for the MOD, he also played locally around Bedford before retiring at the age of 40. 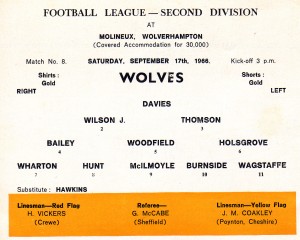 No sign of the name Wallace in the programme, nor was he in that day's reserve squad at Bolton.

“Like many others, I wished for greater success but to have played for the team I supported as a boy makes me feel very proud to this day.

“When I was on the staff, I travelled daily by train with Alan Harris, who was also released and went on to do well with Telford. My other pals included Doug Griffiths, Alun Evans, Les Wilson, John McAlle, Brian Thompson and Evan Murray.

“I have not kept in touch, although Brian Thompson and I met when he became manager of Rushden Town and I joined them as a player for a couple of seasons before they joined the League.”