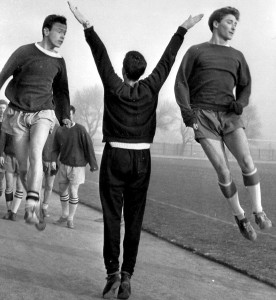 John Jarman (centre) at work at the training ground.

Former Wolves coach John Jarman has died at the age of 78 after a short illness.

The Rhondda-born son of a miner had a lifetime in football, although he missed out on a possible first-team career at Molineux following the effects of a serious knee injury in his teens.

He was taken back to the club by then manager Sammy Chung in 1977, though, and spent several years there before following another of his Wolves bosses, Ian Greaves, to Mansfield.

And it was in the North and East Midlands that he became best known.

He was assistant to Greaves almost throughout the six years that make the ex-Manchester United man the longest-serving manager in Field Mill history.

Together, they inspired the club to promotion to the Third Division in 1985-86 and to Wembley the following year for the only time in the club’s history – a day crowned by the winning of the tournament that was known as the Sherpa Van Trophy by the time Wolves won it 12 months later.

Jarman, who played almost 50 games for Barnsley as a tough wing-half after joining them from Wolves for £8,000, later set up a sports complex in Nottinghamshire and helped develop the Derby County Academy as a model that Howard Wilkinson adopted as part of his vision for the English game.

He had launched his career in the dug-out with a player-coach role at Walsall and then served as an Albion coach for five years from 1962.

Among his other posts were those he took with the FA as a Midlands regional coach and with the FA of Ireland, for whom he helped groom the likes of David O’Leary, Liam Brady and Frank Stapleton. 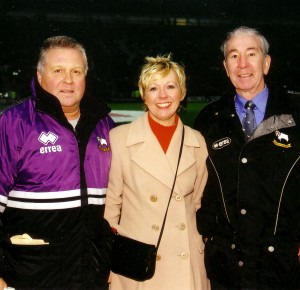 John Jarman (right), with colleagues and friends at Derby in 2002.

Jarman is survived by his wife Barbara, daughter Alison and two grandchildren. His funeral is at Mansfield Crematorium on Friday, October 30, at 11.45am.

A minute’s silence is due to be held in tribute to him before Mansfield’s FA Cup qualifying clash at home to Altrincham today.