Air Miles And Victories In Abundance 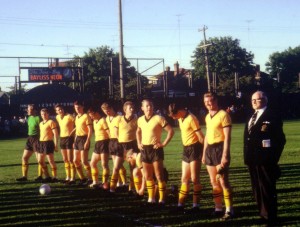 Wolves' players, with skipper George Showell nearest the camera, line up on tour in 1963.

Wolverhampton Wanderers had just finished the last of the many fine seasons they enjoyed under Stan Cullis when they headed across the Atlantic for the first time more than 46 years ago.

Having twice visited South Africa in the previous decade and a bit and also played in Russia, the club found their plane pointing in another direction as they set off on a five-week trip that was to bring them nine wins and a draw from their ten matches.

Seven days after a 5-1 last-day defeat at Blackburn that was out of keeping with the form that had left them in a final placing of fifth, Wolves’ 17-man squad were accompanied on lift-off from London Airport by manager Cullis, trainer Joe Gardiner, coach Bill Shorthouse, chairman James Marshall, deputy chairman John Ireland and fellow directors Wilf Sproson and Cliff Everall.

There was no place for Bill Slater, who had been given a free transfer prior to taking up a post as deputy director of the National Recreation Centre at Crystal Palace, but management opinion of Peter Knowles was high enough for him to be included with the seniors rather than be held back for an FA Youth Cup semi-final replay, which Wolves lost 4-2 at West Ham despite goals by Clive Ford and Gordon Roberts.

The tour was neatly divided into five games in America and five in Canada, the first of them against Montreal Cantalia on Tuesday, May 23, three days after their arrival.

The Eastern Canada Professional League side provided suitably comfortable opening opposition, Ted Farmer’s headed goal being followed by others from Chris Crowe and Terry Wharton before half-time. Although the local side pulled one back, Crowe and Gerry Harris struck to complete a 5-1 Wolves victory.

As a later generation of Wolves players were to discover in 1967, 1969 and 1972, any tour of the USA comes complete with many an hour spent in airports, the party then flying to New York, where sightseeing – at the right time – was very much on the agenda.

Cullis’s team had their minds on the job in hand on a wet Friday evening, though, when they ran out 4-2 winners over Schalke 04, the club who had knocked them out of the 1958-59 European Cup.

Again, the bulk of the work was done in the first half, Farmer setting up Jimmy Murray for the opener and Wharton doubling the lead before the half-hour. Wharton turned provider as Murray made it 3-1 at the break, although Fred Davies saved a Berni Klodt penalty to keep the Germans at bay. Victory was assured in a quieter second half by a Peter Broadbent shot that bounced in off a defender. 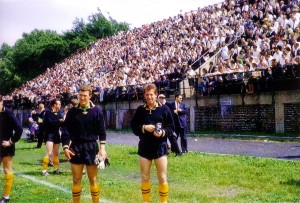 Wolves, boosted on their travels by the news that Molineux winger Alan Hinton had scored a hat-trick for England under-23s in Belgrade, made the shortish hop to Philadelphia for their next assignment – against Ukranian Nationals after the luxury of a four-day rest.

In considerable heat, the US Eastern Championship winners were a tough nut to crack in a game played on a baseball pitch, although a Krawec own goal was followed five minutes later by a Farmer header from Murray’s cross. From 2-0 down, a side who included former Blackpool player Barry Oliver hit back to level and then force a fine save from Davies, who had gone on for Malcolm Finlayson. But Farmer hit the winner after Murray’s shot had been well saved.

Back in New York, this time on Randall’s Island, Wolves were much less stretched in beating an American Soccer League XI at the start of their second full weekend Stateside, Gerry Harris opening the scoring from 30 yards and Crowe making it 2-0.

The injury-plagued Farmer, who had scored nine times in only 13 League matches in 1962-63, made the game safe with two quick goals at the start of the second half and Barry Stobart, having earlier had an effort disallowed, hit the fifth from 15 yards as Wolves’ 5-0 success made it four wins from four games.

The squad flew half way across the continent for their next game three days later and went one better by hammering Catholic Youth Council 6-0 in St Louis. The heat, all 82 degrees of it, was more testing than the opposition under floodlights as Crowe led the way with two goals and an ‘assist’ for one of Farmer’s two, Wharton and Broadbent also figuring among the scorers.

For the first time, Wolves sampled life on the west coast as they took on a Mexican City Select XI on June 9 in a game that would have been against a San Francisco XI had the organisers been able to reach financial agreement with them.

Within 20 minutes, it looked another comfortable mission as Farmer, set up by Broadbent, struck the first and the in-form Crowe the second and the side were barely tested before Wharton hit the third in the last minute to send the 7,000 crowd home content with what they had seen. 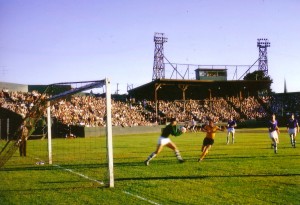 Broadbent steams in to no avail.

The big figure missing from the trip was Ron Flowers, who had been on England’s summer tour of Europe. He lined up alongside Jimmy Melia – later to move to Molineux – in an 8-1 romp in Switzerland that came as Wolves cut a winning swathe on their criss-crossing of a more faraway land.

But the victorious run ended at six as Bangu dug in for a 2-2 draw in Vancouver in a match watched by far the biggest crowd of the tour, 19,339. Crowe cut in to open the scoring from outside the area in only the tenth minute and Murray soon drove in the second after two shots had been blocked. But the Brazilians hit back and were to equalise a few minutes after Dave Woodfield was sent off at the end of the first half.

The only player not yet used in the starting line-up was Ken Knighton, who had been sidelined by an ankle injury picked up in training. But he was given an outing as Wolves edged home 2-1 in Victoria, British Columbia, against West Victoria All Stars. Stobart quickly opened the scoring with a powerful shot from a pass by the impressive Broadbent, who was denied by two fine saves. Then Murray, on as a second-half substitute, hit the winner after a link-up with Johnny Kirkham before blazing a penalty over the bar.

Wolves were back in Vancouver for match no 9, five of their young players having been treated to some home comforts in their earlier stay in the city. Knighton, Knowles, Wharton, Fred Goodwin and John Galley were all dinner guests at the home of the aunt of Les Wilson, who had been spotted by Cullis and Gardiner when playing in a local match and invited to train with the squad.

This time there was clear daylight between the sides as the tourists won 4-1 thanks largely to a Farmer brace in the opening 26 minutes, the second of them superbly set up by Crowe. Davies had to make several fine saves after Vancouver All Stars had pulled a goal back, though, and Wolves needed an angled shot from Murray to make themselves comfortable, substitute Stobart then going past two defenders to net the fourth.

Wolves’ party fitted in a visit to Niagara Falls before packing their bags for home and, amid their travel-weariness, spared a thought for their final opponents, Bangu. The re-match came near the end of the Brazilians’ three-month tour of Europe and North America, so the 4-1 scoreline was perhaps understandable. 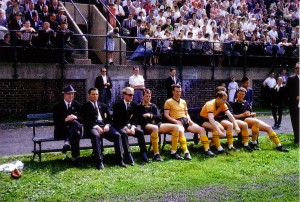 Stobart crashed in the opener, Farmer cashed in on a mix-up to double the advantage and Gerry Harris added a third before a consolation goal went in at the other end. Stobart’s 76th minute clincher underlined Wolves’ superior finishing and had them in good heart as they travelled back to Wolverhampton – to be greeted by their first sight of rain in weeks!

Cullis, although disappointed by the quality of pitches, was delighted with the tour and described his players as ‘fine ambassadors.’ “They played every match as though it was a League fixture,” he said. And he wouldn’t have settled for anything less.