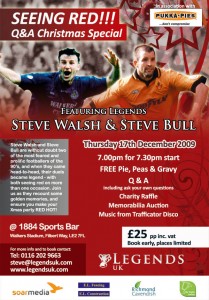 Steve Walsh is to come face to face with Wolves legend Steve Bull once more – after revealing how close he came to moving to Molineux.

For years, the powerhouse Leicester defender was regarded as public enemy no 1 as he and the record-breaking striker exchanged much more than a few bumps and bruises.

Both were sent off in confrontations between the two but are now teaming up at dinners on each other’s patch, starting at the Walker’s Stadium, Leicester, on Thursday, December 17.

They will be on stage together to recount memories of their gruelling battles, the first of which saw Bully dismissed in front of the watching England manager Bobby Robson at Filbert Street in 1989.

The red card tally was evened up when Walsh took the long walk at Molineux in August, 1992, on the night his nemesis charged down his attempted clearance and scored his 200th Wolves goal.

But the defender said: “There were other occasions when a few sparks flew between us.

“Andy Mutch had the good sense to keep out of the way at times but I remember a clash in a different game at Filbert Street when I was a bit naughty.

“I didn’t receive a card but, let’s just say, there was a coming together and I ended up with Bully’s teeth marks in the top of my head!

“We were two highly committed players, often rival captains as well, who hated the other to come out on top but there was a lot of respect there as well and we’ve ended up as good mates.”

The pre-Christmas pies, peas and gravy night includes a question-and-answer session, auction of sporting memorabilia and disco and will be followed by a reunion in ‘Bully’ territory next year.

Walsh’s goals won the 1994 play-off final for Leicester against Derby and he also lifted the 1997 League Cup for them as well as guiding them to their highest-ever Premier League finish, eighth, in 1999-2000.

And he could easily have brought a bit of his muscle to bear at Molineux in that latter year. 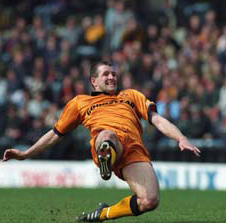 All effort as usual from the master Wolves striker.

“I went over to Wolves for talks with Colin Lee and actually did a day’s training with a view to joining them on loan,” he added.

“It was all set up but Norwich were in for me as well and I had a call from Tony Cottee urging me to sign there instead.

“I knew one or two of the lads at Carrow Road and that made the difference.”