The Most Moving Of Days 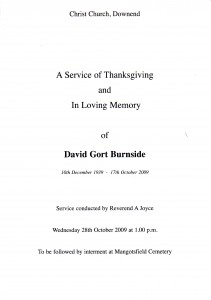 A keepsake from a sad day.

Numerous officials from the FA, where he worked for more than a decade and a half, were joined at the lunchtime funeral service in Bristol by representatives from his various clubs.

Tony Pulis, Mike Pejic, Sam Ellis, Clive Whitehead, Brian Eastick, Lindsay Parsons, George Petchey, Tony Fawthrop, Bobby Williams and the ex-Albion trio of Graham Williams, Brian Whitehouse and Micky Fudge were also in attendance, as were officials from two of his other clubs, Plymouth and Southampton, and players from Cheltenham and Colchester.

As the hearse was lifted from a horse-drawn carriage and taken into the church, the John Lennon classic ‘Imagine’ was played.

Wilson, who describes Burnside as his closest football friend, delivered a detailed, moving eulogy in which he called him ‘a simply brilliant footballer,’ who had caught his imagination at the age of 12 with his famous ball-juggling act.

“Real Madrid’s Ronaldo would have been very impressed,” he said. “He was also an outstanding player on the field, where it really mattered. It was obvious he could play with and against some of the best players in the world.

“You can imagine the thrill I felt when (in 1966) he walked into the Wolves dressing room of which I was a part.

“Our professional relationship became an instant friendship which lasted more than four decades.”

Burnside, who died suddenly the weekend before last aged 69, only a day after being rubber-stamped to fight to become a UKIP MP in Bristol at the next election, played 43 games for Wolves and scored five goals. 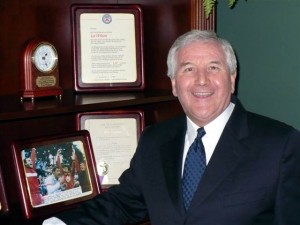 “In our midfield, we already had players like Mike Bailey, Peter Knowles and Ernie Hunt. With David in there as well, it’s no surprise we went up that season.”

‘If  I Ruled The World,’ by Tony Bennett, was played as the gathering left the packed church.