A Wolves Career From Nowhere

Gwyn’s Golden Opportunity Came Out Of The Blue 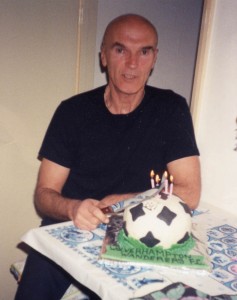 Gwyn Jones might have played only 22 games for Wolverhampton Wanderers but the fact that he ended up at Molineux at all was quite remarkable.

“I had no intention at all of being a professional footballer,” says the 75-year-old from his home in ‘Wayne Hennessey country’ in Anglesey. “I was set upon becoming a teacher and had a job lined up at the grammar school I had attended.

“I was planning to go to college in North Wales when I played alongside Stanley Matthews, George Farm and some Welsh internationals for a Bangor Select XI in a charity match against Wolves’ first team.

“After the game, I was in the dressing room, dripping with sweat, when I became aware of the presence of these polished shoes and pinstripe trousers in front of me.

“It was Mr Marshall, the Wolves director, and he said: ‘How would you like to come and play for us?’

“Within seconds I said ‘yes,’ although I’d never had any such ambitions. Everything in my world turned upside down completely out of the blue.

“I had already been shown the room I would have at college but all those thoughts went out of the window and I headed instead for Wolverhampton.”

Within three months, the Mid Wales-born full-back made his first-team debut in place of the unfit Bill Shorthouse in a 3-2 home win over Albion on December 17, 1955.

It was the very end of the following season before Jones had another taste of senior football when he faced Aston Villa home and away on successive days. And he played only twice again in 1957-58, including a 4-0 victory at Manchester United.

Wolves, by then, were at the peak of their powers under Stan Cullis and the fact that his 22 games were marked by 12 victories, five draws and five defeats underlined what a formidable side he was trying to break into.

“I turned down a move to Norwich and also heard later that Joe Mercer had come in for me from Villa,” added Jones, who played in the Wolves side who won the 1959 Charity Shield at Nottingham Forest’s expense. “But managers don’t like to sell to the club next door. 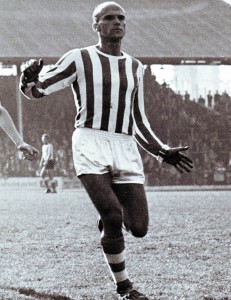 Jones in his Bristol Rovers days.

“In the end, I was released in 1962 and then spent four years at Bristol Rovers, where I played around 160 matches.

“But I saw a few parts of the world in my time at Wolves and was at possibly the biggest club in the country for seven years, so I have no regrets. It was also there that Jimmy Murray introduced me to Margaretta, the Austrian girl I have been married to for 39 years and who I was with for 13 years before we got married.”