Steve Signs In Again For Fans 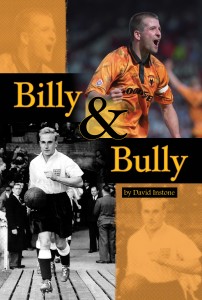 Steve Bull has been booked in at Molineux this Saturday for a signing session that marks the official launch of a new book chronicling his magnificent deeds.

Wolves’ all-time record goalscorer will be in the Family Information Centre, next door to the ticket office behind the Stan Cullis Stand, immediately before the glamour home game against Arsenal.

He is there from 2.30pm to 5pm (November 7) to sign copies of David Instone’s new publication, ‘Billy & Bully’, a 224-page hard-back that is hot off the presses.

The book draws several surprise coincidences in the careers of Bully, who scored a phenomenal 306 goals for the club, and Billy Wright, who played a then world record 105 games for England.

And it also explains, by outling several important anniversaries, why this is the year to honour two of Molineux’s greatest-ever icons.

It will be on sale on Saturday in the Family Information Centre.

Supporters attending to have their copies signed by the striker are asked to respect those behind them in the queue by not asking him to pose for photographs or to sign other items of memorabilia.

Those fans who pre-purchased the book and said they would collect it from Molineux will be able to do so from this lunchtime (Wednesday), including match-day this weekend.

Billy, who died in 1994 aged 70, supported Arsenal as a boy and managed them for four years in the 1960s following his extraordinary trophy-filled two-decade stay with Wolves.