Gerry At Home With Wolves

A Fleeting Chance On The Doorstep 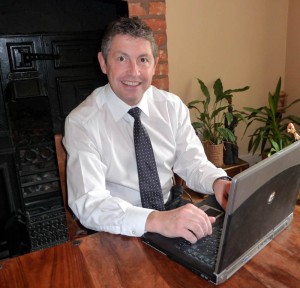 The mid-1970s Wolves youngster was not just from Wolverhampton, he was brought up in a street lying in the shadow of Molineux.

“I was born in Red Cross Street, which ran where Asda is now,” said the energetic midfielder.

“I was obviously a Wolves fan as a kid and believe I was the first Wolverhampton-born lad to play in the club’s first team since Les Cocker around 15 years earlier.

“I went to St Chad’s School, played in the same county side as Dave Rushbury from the Albion and still live in Codsall, although I work as national sales manager for a Lancashire-based company who manufacture doors and trays for showers.”

Sadly, O’Hara’s first-team career in League football was a fleeting affair, dogged as it was by some misfortune.

Having been denied his debut in the top-flight game at Tottenham in 1975-76 by an ankle injury suffered in the reserves at Port Vale just before, he belatedly went in for the first time in the FA Cup home win over Ipswich three months later.

He played in the following six games as well before hurting his ankle in a friendly at Southport while Wolves were on the Lancashire coast preparing for their FA Cup quarter-final tie against Manchester United.

“I got back in for the first couple of Second Division games the following season but then had a set-to with the reserve manager, Brian Garvey,” O’Hara added.

“I was 19 and thought I knew it all. Brian had taken the club to the FA Youth Cup final the previous year and, as I was a bit too old for that side, I thought he was favouring the lads who had played.

“The outcome was that I was suspended for a week by Sammy Chung. I thought I was having a raw deal and around that time started to feel unwell with rheumatic fever, which is a virus that attacks your joints and leaves you aching and sore.

“Wolves were patient in waiting for me for 13 or 14 months but my chance had gone and I was lucky Mike Bailey had joined Hereford by this time as manager and asked me down there. 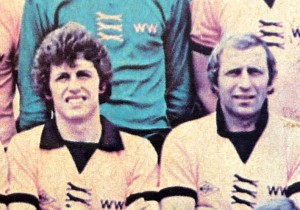 O'Hara alongside Mike Bailey in a Wolves team picture.

“I had all the pre-season with them but couldn’t agree a contract and spent the next three seasons at Worcester instead, scoring lots of goals and enjoying my football.

“I never made it back to the League, although I heard later that Ron Atkinson was trying to take me to Albion until I severed my cruciate knee ligaments going into a tackle in an FA Cup tie between Worcester and Malvern.”

O’Hara, 53 next month, totalled 11 senior outings for Wolves and also served Willenhall, Dudley, Bilston, Redditch and Bridgnorth before retiring in the mid-1990s.