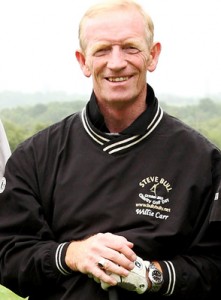 Willie Carr in recent years, at a golf day bearing the name of a latter-day Wolves star. Picture courtesy of Tony Thomas.

Willie Carr will be rooting for the Republic of Ireland in the forthcoming World Cup play-off games – and not just because he sides with all the home nations.

The diminutive former Molineux midfielder, although born in Glasgow, has Irish blood from each of his parents’ families and could have found himself with a dilemma had he been playing now.

“My second name, McIanny, is an Irish surname from somewhere back in the family and I probably have some aunts and uncles from over there, although I haven’t been that close to them due to living in England for 46 years,” he said.

“I only won six senior caps but I ‘m glad that I got to represent the country of my birthplace. I’m a proud Scotsman.

“Over the next week and a bit, though, I’ll be supporting the Irish in their play-off games. I’m not one of these people who wants all the other home countries to lose. Not unless they’re playing Scotland anyway.”

Carr, who played 289 first-team games for Wolves after joining them in 1975, had a toe in the English system when going to Crystal Palace for trials with England Schoolboys after moving south to Cambridge with his father in 1963.

A place in the side eluded him but he graduated via Scotland under-23s to a place in their senior side, his debut coming in Belfast in 1970 against a Northern Ireland team containing Derek Dougan and George Best.

“I was too small at schoolboy level,” he added. “I was 5ft 1in and a bit and seemed to be surrounded by six-footers like Jeff Blockley, who became a team-mate at Coventry and Peter Shilton. 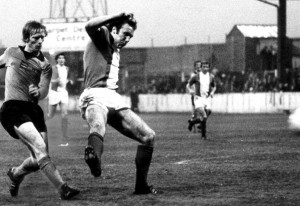 Carr shoots for goal at Carlisle in 1977.

“Alun Evans was there as well before making his debut for Wolves a year or two later and he looked quite a player.

“I was disappointed not to break back into the Scotland side after moving to Molineux. I played under three different Scottish managers but didn’t win another cap after 1973.

“Tommy Docherty told me years later that he accepted he should have used me more and I thought to myself: ‘Well, thanks for saying that now!'”