Curtains After A Clash With Cullis 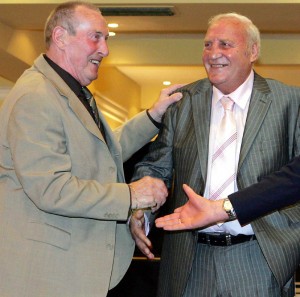 It’s part of the rich tapestry of Molineux life that Bill Slater and Dennis Wilshaw, two of the cornerstones of Wolves’ phenomenal 1950s success, were never anything more than part-time players.

The duo, to the occasional frustration of Stan Cullis, were footballers only when their teaching jobs allowed them to be.

What’s not so well known, though, is that the Iron Manager splashed out big money in the transfer market in 1961 and then allowed his acquisition to train over 100 miles away and report only on match days!

“We had just had a baby daughter when I joined Wolves – and Stan agreed to conditions,” recalls Mark Lazarus, “namely that I could continue living in London and train at my former club QPR.

“It was a bad time for me to move but Wolves were such a big club then and I thought Stan’s influence at the FA would get me capped for England, so I thought I couldn’t turn them down.

“He watched me for six or seven weeks and told me during the negotiations that, if I didn’t sign, he was going to go straight to Swindon to sign Mike Summerbee.

“The other players only saw me when I turned up at Molineux for a game, or at another ground we were playing at, but I got on fine with them all.

“It wasn’t long, though, before I had a clash of personalities with Stan. He always seemed to be slaughtering the players, even once when we were four up at half-time at Birmingham, and I wasn’t as good as my team-mates at taking it.

“I was from a Jewish family who were used to some anti-semitic abuse and who therefore learned to stand up for themselves. So I soon showed in the dressing room how outspoken I was.”

East London-born Lazarus, also chased by Tottenham, West Ham, Manchester City and Albion, cost Wolves a then club record £27,500 and scored goals at the rate of one every three games for a side on the decline. The trouble was that he played only nine times.

Despite netting against Manchester City and Sheffield Wednesday as well as at St Andrew’s, he became puzzled about being used at inside-right and even as a centre-forward, having played only in the no 7 role at Rangers when scouted by Cullis.

“I’m from a huge family,” added the 70-year-old, who is reputed to have had 34 relatives in attendance when he made his debut at home to Cardiff in September, 1961.

“I was the seventh son of eight and also had five sisters. Two of my brothers had British title fights and I did a lot of boxing as well in my teens until my licence was taken away when I became a professional footballer.

“Fighting was in our blood and our pride was very important to us. We spoke up against what we thought was wrong and I used to marvel at how big, strong men like Ron Flowers, Eddie Clamp, Eddie Stuart, George Showell and Bill Slater would sit there and take what seemed injustified criticism in the dressing room.”

Lazarus was gone by February, 1962, shipped back to QPR for £16,000 for the second of his three spells there. In his last, he achieved Loftus Road immortality by hitting the late winner for Third Division Rangers against First Division Albion in 1967 in the first League Cup final to be staged at Wembley. The winger in his brief Molineux career.

Success has come his way in big helpings since he quit football, though. Engaging first in a waste paper business and then in a general transport one, he set up a removal firm in 1970 that still runs, under his son’s control, 39 years on.

He also owns nine factories which he rents out, so, with 150 miles of telephone line between us, I went in with the big punch: “You’re a multi-millionaire then?” “Not multi, no, but we have a detached house, we go on holiday and out for a meal when we want and life has been good,” he added.