Job Fit For A King 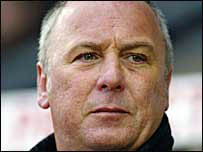 Andy King, more than 20 years on from his Wolves stint.

Andy King has been offered a surprise new foothold in the game – by a man he helped on his way a decade and a half ago.

The mid-1980s Wolves midfielder was low on luck and high on anxiety when the figure from his past reappeared in his life this summer to considerably lift his spirits.

Adrian Boothroyd was King’s first signing as Mansfield manager in 1993 and worked with him for the best part of three years in sewing seeds for a friendship that obviously ran deeper than the latter realised.

“I had a heart attack five months ago and was at home recuperating when Adey got in touch,” King said.

“He was good enough to pop to see me when I was in need of support and then got in touch a few weeks later to say he was going in as Colchester manager and to ask whether I was fit enough to join him.

“I was surprised as well as delighted to be invited on board like that by a manager I rate highly and I took him up on his offer.

“I am operations manager, which basically means I organise player recruitment, so there are a lot of games to cover. But I’m spending a lot of time as well on living a healthier life.”

Following his scare and the subsequent angiogram, King quit his post as Plymouth’s chief scout, deciding the travelling from his home near Cambridge was too much.

“I was in hospital for ten days and it will surprise my friends that I haven’t had a fag, a drink, a bar of cholcate or even a pork scratching since,” the former Swindon manager added.

“I have found out just how boring life can be! Seriously, I had to look after myself better and lose some weight, otherwise the next heart attack might not have been just a warning.”

There’s another Wolves connection at Colchester these days, with John Ward having gone in as Boothroyd’s no 2 after helping Stockport out earlier in the summer.

And King has happy memories of Molineux despite the struggles the club were enduring while he made a highly worthwhile contribution of 30 games and ten goals in 1985. 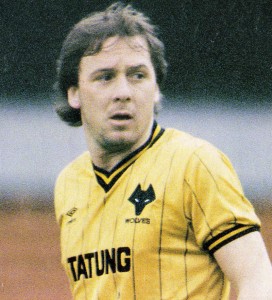 King the Wolves player in the mid-1980s.

“I’m very grateful to Wolves because Tommy Docherty brought me back from Holland and in effect helped me back to the top division,” he added.

“I scored quite a few goals and made a name for myself again, so much so that Luton took me back to the top flight.

“I applied for the manager’s job while I was at Wolves and was told I’d got it. When I arrived at the training ground, though, I was greeted with the news that Sammy Chapman, a really lovely bloke, had been appointed instead.”