Mason’s One Regret In Golden Career 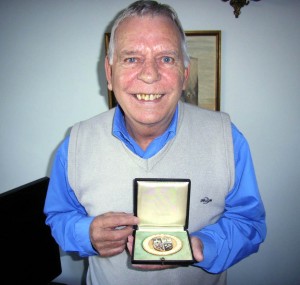 Bobby Mason today, with a keepsake from Wolves' European Cup meetings with Schalke in 1958-59.

Almost 50 years on, Bobby Mason still finds difficulty in talking about his exclusion from Wolves’ 1960 FA Cup final side.

The former inside-forward is an engaging host and has two League Championship triumphs and Charity League success to reflect happily on.

But not even a winners’ medal and a miniature replica of the Cup from Wolves’ Wembley date against Blackburn can mask the personal disappointment he felt despite the club’s 3-0 victory.

“I was lucky to have a great career at Wolves and win a few things but it still hurts that I didn’t play in that final,” he says.

The facts bear him out. He played in every round up to the final and highlighted his contribution to the run by scoring in the 4-1 fifth-round win over Luton at a ground where Wolves had crashed 5-1 on his first-team debut four seasons earlier.

Mason also played 37 of the 42 League matches in 1959-60 in a Wolves career haul of 173 games and 54 goals, so his overlooking at the twin towers in favour of the rookie Barry Stobart truly is one of the occasion’s hard-luck stories.

The 73-year-old’s accent these days betrays the fact he was born in the heart of the Black Country, in Great Bridge not far from ‘Steve Bull country.’

Almost five decades living elsewhere have rounded his tones and he and his wife Shirley have made themselves at home in recent years in a village in South Derbyshire.

“We lived in Christchurch, Dorset, for 38 years and before that were in Chelmsford when I played non-League there and had a spell with Leyton Orient,” he added.

“And I worked for six years as a lorry driver after serving in an engineering company that made bits for satellites. 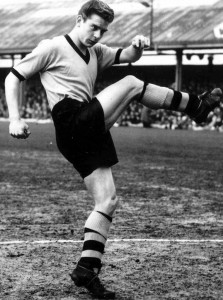 Warming up for kick-off in a game at Blackpool half a century ago.......

“Having been lucky enough to play football for a living, I couldn’t stand the thought of being hemmed inside four walls. I wanted a bit of fresh air.

“We live not far from where Jimmy Murray was buried and I went to his funeral last year as well as going to visit his grave since. It’s a sad fact as you get older that various members of your side will be lost. That subject seems to account for a lot of contact we have from the Former Players Association.

“I dread those brown envelopes dropping through the letter box.”