Keeper Who Threw Game Threw His Career Away 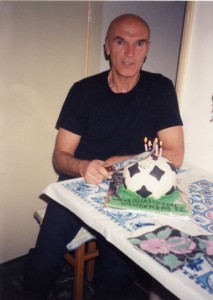 Whenever the phrase ‘match fixing’ is uttered, Wolves fans’ minds will probably go back to the controversial 1972 victory against a Leeds side around whom suspicion subsequently gathered.

For a player from a different Molineux era, though, the recent announcement that an enquiry was being held into the outcome of various games across Europe will have provoked very personal memories.

Gwyn Jones played only 22 competitive games for the club – from 1955 to 1962 – and had moved on to Bristol Rovers by the time he took on the role of whistle-blower during the betting scandal that rocked the English game in the early 1960s.

It’s no wonder he ‘shopped’ one of his team-mates, either. He was offered a bung by him to help throw a game.

“The fate of the Sheffield Wednesday players who were prosecuted had much more publicity but I was approached before a Rovers game at Bradford Park Avenue in 1963,” Jones revealed.

“A keeper called Esmond Million was signed by Rovers from Middlesbrough at the same time that I joined and he asked me before the Bradford game if I wanted to earn an extra £100.

“I thought he meant on the horses or something and, when he explained what he meant, I said ‘Look, Esmond, I’ll give you the benefit of the doubt if you promise me you’ll do nothing stupid.’

“I hoped he’d come to his senses but he let a back pass from Gary Mabbutt’s father, Ray, go through his legs into the net and also dropped a cross for another goal.

“I wasn’t going to run my socks off to have goals thrown away on purpose, so I exposed Esmond by telling our skipper, Geoff Bradford, at half-time about what had been said to me. We had to nail him.

“The next day, the Press were pushing their way past my landlady to try to speak to me and, straightaway, Esmond was sacked by the manager Bert Tann.

“If I remember right, this was the first time the betting scandal story had come out in the newspapers and I was horrified by what had gone on.” 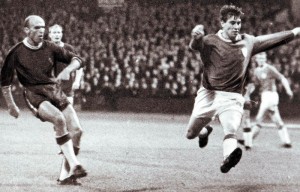 Jones shoots for goal for Rovers at Eastville. Pictures courtesy of Mark Leesdad.

Jones, who was also featured by Wolves Heroes on October 31, is now 75 and a fully qualified FA coach, having attended the same course as Bill McGarry.

He followed his playing career by working for 22 years in the clerical department of an aluminium smelting company and took early retirement at the age of 57.