Hinton Home And Happy To Be Honoured 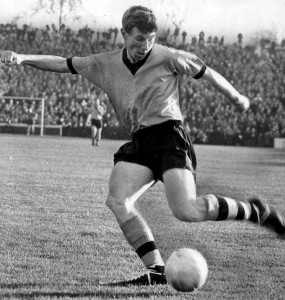 Former Wolves winger Alan Hinton is back in the UK and taking the plaudits from football fans once more.

The Wednesbury-born ex-England player, who has lived in the United States or Canada since 1976, is only an occasional visitor to these shores these days, although he has family in the West Midlands, including a nephew Craig who plays for Northampton Town.

But he has been attracted this week by a reunion at the club with whom he twice won League Championship medals.

Sadly, that is Derby rather than Wolves, who had just retained the First Division title when he signed as a lad at Molineux in the autumn of 1959.

Some trace the demise of Stan Cullis to the day in January, 1964 when Hinton, having top-scored for the club in 1962-63 with 19 goals, departed for Nottingham Forest.

The outside-left, who made his Wanderers debut in an FA Cup draw at home to Huddersfield early in 1961, broke into England’s side on the back of his scoring rush, which included a hat-trick at Fulham and braces against Blackburn, Albion and Burnley, the latter two clubs conceding seven on their trips to Molineux.

Hinton’s England bow came against France at Hillsborough in October, 1962, and he remained a force in a struggling Wolves side the following season, netting five times before the end of October.

Cullis nevertheless decided he could do without him and oversaw a swap deal also involving Forest winger Dick Le Flem, Hinton going on to have much the better career of the two.

He spent four years at the City Ground, where he won his other two England caps, before being taken by Brian Clough to Derby for £30,000 in 1967.

And he became a legend at the Baseball Ground, contributing around 300 games and 70 goals, and helping the Rams lift the title in both 1972 – with much last-night help from Wolves! – and 1975.

So much so that he has just been named in Derby’s best all-time X1 – an honour that has seen him welcomed back for a walk-on part at today’s home game against Albion.

“It has been a fabulous year,” said Hinton, who at 67 has been working as a TV and radio analyst based at Seattle Sounders during their inaugural Major League season.

Hinton, with commemorative bottle of beer, and Nigel Clough, the son of his own Derby manager. Picture courtesy of Derby County FC.

“The Derby honour proves that fans have great memories of those times. It was a time they will never forget and fathers have obviously passed those memories to their kids.”

Hinton, who later played for Dallas Tornado and Vancouver Whitecaps before taking a host of coaching and administrative posts in the USA, even has his face on an East Midlands brew.

He, along with the other members of Derby’s best all-time team, has his picture on bottles of Marston’s Pedigree.