Gould Doing It By The Book 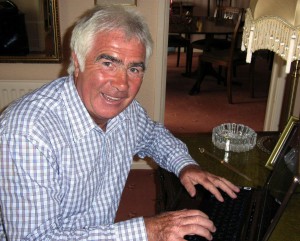 Bobby Gould at his faithful keyboard.

The 63-year-old, who had two prolific spells at Molineux, is busy penning the story of his long and varied career in the game ready for publication in 2010.

Having led Wimbledon to their shock FA Cup triumph at the expense of Liverpool in 1988, Gould subsequently spent almost four years as Welsh manager in the 1990s.

During his tenure, he made Wolves defender Ryan Green the youngest player ever to represent the country – at the age of 17 years 226 days.

“I’ve been thinking about writing my life story for a year or two now and am delighted to be under-way with it,” he said.

“It will be out some time next summer or autumn and will hopefully appeal to a wide cross section of supporters.

“I had a lot of clubs as a player as well as plenty of jobs as a manager and have been very lucky to make a good living from the game.

“People have told me I should think about doing a book and I’m enjoying the research side of it as well because I’ve always kept scrapbooks of my career.

“But it won’t be heavy with facts and statistics. We’re in the entertainment business after all and I want it to be fun to read.

“I’ve always been able to have a laugh at myself and, in addition to rubbing shoulders with a lot of big personalities, I’ve seen some hilarious goings-on. I will be making sure those lighter moments come across regularly in the story.” 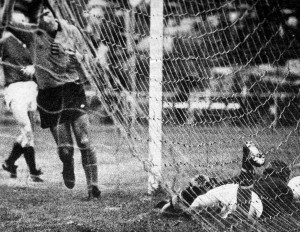 Gould celebrates a Wolves goal on tour in Sweden in 1976.

Gould was twice taken to Molineux by Bill McGarry, first from Arsenal in 1970 and then from West Ham in 1975.

He scored 25 goals in only 52 games the first team round – all while Wolves were in the top flight – and netted 14 times in 41 matches in his second stint.

For well over 30 years, he has had a house overlooking the Severn Estuary and commutes from his Bristol home for regular duty with talkSPORT.