Call This A Fixture Rush? 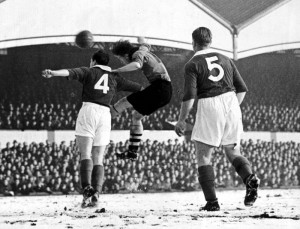 Wolves on the attack at a wintry Molineux in 1948.

In bygone days, Christmases weren’t only white – they were busier and more eventful, in the football sense, than they now are…….as part four of our Way Back When series outlines.

This isn’t a clumsy attempt to stir up the hornet’s nest surrounding Mick McCarthy’s team selection at Manchester United last week. We’ll leave that to others.

But you wonder just what present-day managers would have made of the festive challenges clubs faced in decades past.

Wolves were no strangers to the concept of playing on Christmas Day during their 1950s golden age – and that wasn’t always instead of contesting a Boxing Day fixture either.

But here’s the irony……Wolves, who had also faced Fulham on the 23rd, made only two changes for the return against the Terriers and, as a variation on what happened at Old Trafford last week, one of those was in goal, where Bert Williams returned for Dennis Parsons!

There were no changes from Christmas Day to Boxing Day when Wolves faced Aston Villa away and then at home the following season before the fixture list spared Stan Cullis’s side action on the big day in 1952.

There was a sting in the tail, though. They drew at home to Sunderland on Boxing Day, then set off to the north-east straight afterwards and lost 5-2 at Roker Park the next day, nine players again featuring in both games.

Wolves had two days’ grace between their matches against Everton in 1954-55 but were dealt a tough hand the following Christmas when having three matches in four days, including trips to Manchester City and Arsenal!

The club’s last Christmas Day fixture was a defeat at Charlton in 1956-57, after which they had home-and-away meetings with Portsmouth on the 26th and 27th in their third title-winning year, 1958-59. 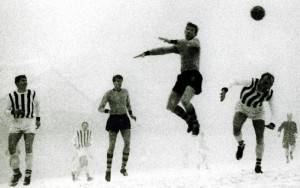 John Galley and an airborne Alan Hinton press in the abandoned game against Albion on Boxing Day, 1962.

The going got easier from then on, although not for Albion.

In an effort to underline that they felt the Molineux pitch was unplayable on Boxing Day, 1962, the Baggies players jumped in the bath at half-time with Wolves 2-0 up.

They had their wish and the referee subsequently announced an abandonment because of snow but Wolves won the re-match 7-0 three months later, with Terry Wharton hitting a hat-trick.