No Need For Studs On This Pitch 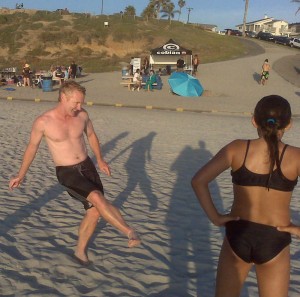 Life's a beach.......performing for an admiring audience.

Last year, by way of a festive diversion, we profiled how Les Wilson and Bobby Gould were spending Christmas and New Year in distant parts of the world.

This time, in extending best Christmas wishes to our readers, we provide a teaser from a far-flung beach.

As an appetiser for one of the stories that will be appearing on Wolves Heroes early in the New Year, we carry a photo of a former Wanderers player now living and working in sunnier climes.

No names for now but our subject played for the club in the 1980s and reminds us he once scored against Monday’s Molineux visitors, Manchester City, in a game in which Mick McCarthy scored an own goal.

We have engaged a fanatical overseas fan to write about the post-Wolves life of the player, who actually went to the club’s recent Premier League game at Manchester United during a visit back to these shores.

In recent weeks, we have also made contact with one of the mystery man’s contemporaries at Molineux as well as homing in on another.

And we are in phone contact as well with two other players – not yet mentioned on Wolves Heroes – from a couple of decades earlier.

John Richards’s link-up with this site is also due to go a step further before the turn of the year and we remain committed to establishing the whereabouts of old favourites and reviving memories of bygone days.

Once more, a merry Christmas from us – and good luck with spotting our photographed man.

Can you tell who it is yet?