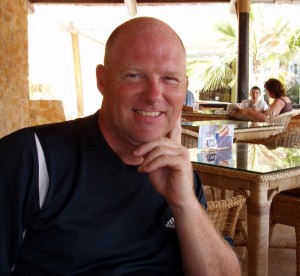 Bob Coy on another of his adventure holidays.

Bob Coy has offered a team-mate’s view of one of the emerging voices on the BBC Match of the Day pundits’ sofa.

Immediately after his 47-game Molineux career, the Edgbaston-born defender found himself lining up in the same Chester side as Lee Dixon, the right-back who went on to win 22 England caps as well as a host of honours with Arsenal.

“I played a few dozen matches with Lee for Chester,” Coy said. “We had some good times together there under Harry McNally.

“I know he went on to play in a fabulous Arsenal back four but, surprisingly, I didn’t think he was a great defender in his early years.

“His real strength was going forward. He was brilliant in his attacking and I think wingers were so preoccupied with covering his runs that they didn’t worry him that much going the other way.

“He scored a few goals as well and had the licence to venture forward because I played as a sweeper with Peter Zelem as one of the centre-halves.”

With Zelem and Coy in situ, Chester won promotion to the old Third Division by finishing runners-up to Swindon in 1985-86 – a level at which the club would face Wolves at Molineux and Sealand Road in 1988-89. 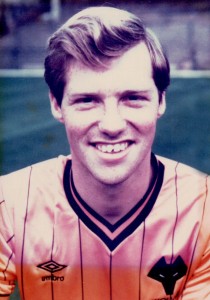 Coy, as Wolves fans would remember him in the early 1980s.

But Dixon had moved on to Bury by then in a career that would take him via Stoke to Highbury, where he featured in a side who won the League Championship four times, the FA Cup three times and also the League Cup, European Cup Winners Cup and Charity Shield.

“He was a good, sound lad,” added Coy, now 48 and living in Redditch. “His Dad had a butcher wholesale business so I think the family were comfortably off.

“I’m delighted he is making a good reputation now in TV. He is on our screens a lot and has obviously done very well for himself off the pitch as well as on it.”

Coy has happily returned to work, as a Birmingham-based account manager for Orange, since we last featured him on this site. We have just added another picture to the piece we did on him in October.