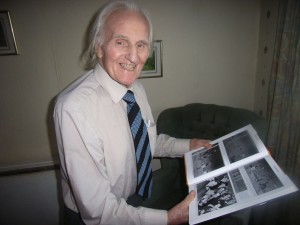 Reflecting on good times.....Jimmy Dunn reading up again on how he helped Wolves win the FA Cup 61 seasons ago.

Three trips to Merseyside in 2009-10 have brought Mick McCarthy’s Wolves the even record of one victory, one draw and one defeat.

And that passionate area of the country also featured strongly in the career of the oldest player so far interviewed by Wolves Heroes.

In fact it was a Liverpool Boys match against Tranmere Boys that led to Jimmy Dunn being recruited to Molineux during the war.

The Edinburgh-born inside-forward scored both goals in Liverpool’s 5-2 defeat and did enough to prompt a watching Wolves scout to put a good word in for him with Major Frank Buckley.

“Most of my matches on Merseyside were at Goodison Park or Anfield but I played on the other side of the river as well and was delighted to see Wolves had won at Tranmere in the FA Cup,” Dunn said when we visited him at his home in Cradley Heath.

“It wouldn’t have been easy for them there and I hope they can get through another round or two as well.”

The 86-year-old, one of the oldest surviving former Wolves players, was a Cup winner in 1949 when he figured in the side who beat Leicester 3-1 at Wembley, having also appeared in all six previous games the club played in that season’s competition.

He scored one of the goals that did for Sheffield United in the fourth round and hit another as Stan Cullis’s men beat Liverpool 3-1 at Molineux in the following round in front of a 55,000 crowd.

Dunn did not have to look far for inspiration as Wolves homed in on their first Cup triumph since  1908. His father had also won at Wembley – with Everton against Manchester City in 1933, when he scored one of the goals.

“My Dad was called Jimmy and I was named after him because I was born on his birthday,” Dunn Jnr added.

“He was one of the Wembley Wizards – the Scotland team who came down and beat England very well – and had a good career, with a few international caps. 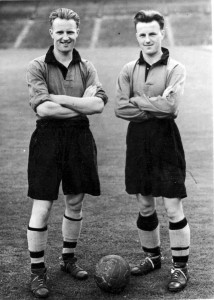 Dunn (left) with his brother Tommy, who briefly tried his luck at Molineux in the late 1940s.

“It’s because he played at Goodison Park that I became an Everton supporter and I was always proud to go back there with Wolves.

“We seemed to do pretty well against both Merseyside clubs and had some memorable matches with them.”