200 (Nearly) Up For Popular Defender 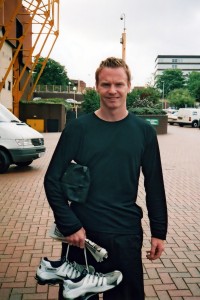 Jody Craddock is poised to become only the sixth Wolves player this century to chalk up a 200th League and cup appearance for the club.

The popular central defender – the first present-day player we have featured on Wolves Heroes – is due to reach the landmark with his next outing.

The last player to accomplish the milestone was defender Joleon Lescott in the autumn of 2005, a few months after keeper Michael Oakes did likewise.

Others to reach a mark in the ‘noughties’ that only 76 players in Molineux history have achieved are Neil Emblen, Lee Naylor and Kevin Muscat.

Football’s changing face is illustrated by the fact that no fewer than 17 of the Wolves players who appeared in the 1970s played 200 matches or more for the club.

The Legends section of this website is dedicated to the 75 men who have had the most League and Cup outings for Wolves.

We plan to add Jody to that glittering line-up in the next couple of weeks.

If he plays all Wolves’ games between now and when his Molineux contract runs out in the summer, the central defender is in line to jump much higher in the Molineux list.

By May, he could leapfrog around 15 of the men who currently occupy places in the top 75. 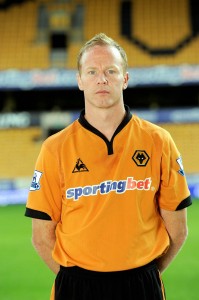 In the mode of dress Wolves fans are accustomed to seeing him in.....picture supplied by Wolverhampton Wanderers.

Depending on the club’s FA Cup progress – and his contribution to it – he could break into Wolves’ top 60. In 60th place at present is Dennis Wilshaw, one spot below Oakes.

We appear to be at least 12 months, however, from seeing any other member of Mick McCarthy’s squad joining the 200 club.