Support For Bert From Capital

Time For Another Honour At Molineux? 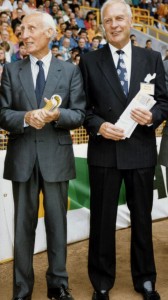 Surprise has been expressed on what used to be known as Fleet Street that one of Wolverhampton Wanderers’ finest has missed out on a New Year honour.

Bert Williams is 90 on the last day of this month and has been the subject in recent months of a concerted behind-the-scenes campaign for recognition.

Under a piece headlined ‘Bert, The Forgotten Hero’, Alan Hubbard spoke up strongly in yesterday’s Independent On Sunday for the man who played 420 League and cup games for Wolves, winning the League Championship and the FA Cup along the way.

“Outside of former Liverpool player Peter (sic) Taylor (92), he is the oldest surviving England international, playing behind greats such as football knights Stanley Matthews and Tom Finney,” Hubbard wrote.

“He works tirelessly for charity and even donated the proceeds of his biography to the Alzheimer’s Society.

“Despite 1,200 supportive letters to Downing Street, including one from Gordon Banks, Williams is still gong-less.

“Maybe it is time someone had a word with the sports minister, Gerry Sutcliffe. As he does a bit of goalkeeping himself for the Parliamentary XI, he might be sympathetic.”

The next round of honours are due to be announced in the summer, when campaigners close to Wolverhampton will again be scouring the lists in great anticipation.

Williams also won 24 England caps despite losing a large chunk of his career to the war and having the likes of Frank Swift and Gil Merrick as contemporaries.

* The ‘Peter’ Taylor referred to in the article is acually Phil Taylor, who also managed Liverpool immediately prior to Bill Shankly.