A Winger With Grit! 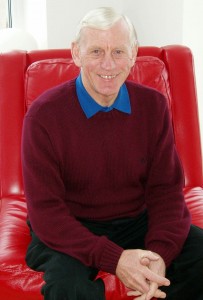 Life is even busier than usual at present for 1960s Wolves winger David Thompson.  His job entails keeping an eye on the state of snow-hit roads near his home in West Yorkshire.

“I have worked for the last five years for Leeds City Highways,” he says. “I am an inspector on the roads, looking after the various contractors – especially those who do repairs.

“But I retire in February so I hope the weather improves by then and I can get some more golf in.”

One of the anecdotes from Thompson’s four years at Molineux is also road-related and shows a very different side to players from today’s image of them as luxury 4×4 owners.

“I lived in digs with two other Wath Wanderers, Barry Stobart and Ken Knighton, and a lad called Gordon Roberts who didn’t make it,” he adds. “It was in Burland Avenue, Claregate.

“I bought Barry’s car, a Ford Classic, then Ken borrowed it to go off on honeymoon.

“Jimmy Melia lived with his wife at the bottom of the same road and he put a good word in for me at Southampton, so I followed him down there in 1966.

“He said I reminded him of Ian Callaghan and he thought there was a place for me at The Dell, which was good of him.”

Thompson signed for Wolves in 1962 at the age of 17 and played all ten of his games for the club in the watershed 1964-65 season – one marked both by relegation and the departure of Stan Cullis.

He managed only 23 games with the Saints but became established as a first-teamer when he subsequently made 131 League appearances for Mansfield and then a few down the road at Chesterfield.

“I think the lower divisions was probably my level,” he admits some 40 years on. “Wolves were going into decline when I was emerging and they were buying players like Chris Crowe and Peter McParland after years of producing their own lads.

“When I first reported for training with them it was over the hills at Brocton. It was terribly hard work, although Bobby Thomson didn’t find it too bad and was always out in front.

“My first game in the reserves was at Manchester City. We scored five, I got one and thought: ‘This is it!’

“Bill Slater was in that side but had left when I made my first-team debut against Arsenal early in 1964-65. I then scored my only first-team goal at Blackburn the following week but had to compete with lads like Terry Wharton and Alan Hinton, so I was in and out of the side.

“I went to see Stan Cullis in his office once to complain I wasn’t playing and I accidentally called him ‘God’ to his face. He didn’t react but I bet he had a good laugh afterwards.

“Ronnie Allen said he didn’t want me to go but Southampton had just reached the First Division for the first time, although you wouldn’t have guessed it from their facilities. After Wolves, they were terrible, especially the training ground. 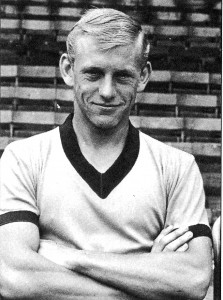 Thompson in his Molineux days.

“I got on really well there with Mike Channon, who was always interested in Peter Knowles, and I’ve stayed in touch with him.

“I played for Southampton once at Leeds, my home-town club, and we would have lost ten if Dave McClaren hadn’t had the game of his life. Then I put this corner over that Ron Davies headed in and we won 1-0.”

Thompson retired with knee trouble in 1974 and moved to the Leeds area in the same year, working in a haulage business for three decades with his brothers.