Wolves Heroes Under The Spotlight

In Demand – On Air And In Print! 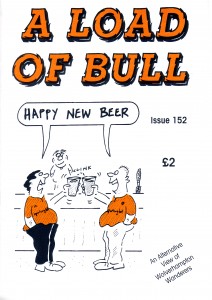 On sale this weekend.

Wolves Heroes’ name has been spread further in recent days by two organisations with Molineux interests very much at heart.

A Load Of Bull has devoted its centre pages to an interview with the site’s creator David Instone in issue 152, which goes on sale at tomorrow’s home game against Wigan.

ALOB were highly interested as well in Thomas Publications’ fast-selling latest Wolves production, Billy & Bully, which is advertised elsewhere on this site.

The £17.99 book remains on sale at all Wolves’ media outlets as well as at high street stores and directly from the publishers.

We are happy to also give a further plug here for our good friends at ALOB.

The fanzine is available from sellers around Molineux. Fans wishing to subscribe should make a cheque for £12 payable to “A Load of Bull” and send it to PO Box 3483, Birmingham, B17 9SF – and the next six issues will be mailed directly.

The BFPO rate is the same while fans elsewhere in the EC should pay £15 and those further afield need to send £20. All prices include P&P. Subscribers should state which issue number they wish to start with and must include their postal address.

* Wolves Heroes will tomorrow be prolifing another former player who has been off the radar – and also living out of the country – for many years.