Q And A Now Up And Running 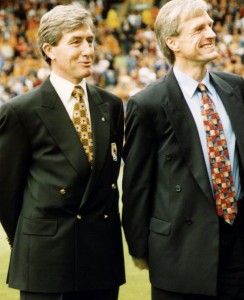 JR (left) with Mel Eves, a team-mate from his later Molineux years.

Cast your eyes a few inches to the right of this item to see where on the home page we have located our new feature.

John Richards proved a predictably popular first subject in our Player Q and A area, so much so that the piece we have just posted with him is to spill over into a part two before the end of January.

From a host of questions submitted by supporters, we can now reveal which two former team-mates JR would love to have had at his side if he were in his peak in today’s Premier League, which opponent he would have relished playing alongside and what it is about Kenny Hibbitt that really needles him!

Richards will be overseeing future entries in this area, collating fans’ questions for other Molineux favourites and also the answers.

His first ‘pick’ will be announced shortly but won’t be from his generation – he plans to look further back than the 1970s.

Fans of this site and members of Molineux Mix will also be asked in due course who else they would like to put questions to.

Richards, newly inducted into the club’s Hall Of Fame, became an official partner in Wolves Heroes in November.