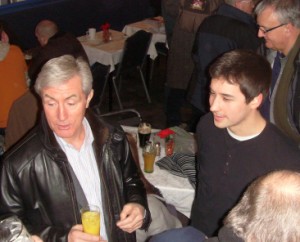 Wolves Heroes is delighted to launch the promised 2010 addition to this website – a feature being overseen by no less a figure than John Richards.

JR is to approach a different former player every few weeks and put to them questions submitted directly to us by our readers or through our link-up with www.molineuxmix.co.uk

Keep your eyes on the news area of our site to see who he will be targeting first. For now, though, the stage is all his as he takes his place as the first subject in our Player Q and A. Over to him……

“First of all, can I say what a pleasure it has been to receive so many questions. In fact, there were too many to answer in one go, so there will be a part two to this feature soon, concentrating, among other things, on my time as Wolves’ managing director. Okay, on with the questions.”

Q: Was there a player during your career that you didn’t play alongside but would like to have done? (From Mutchy) 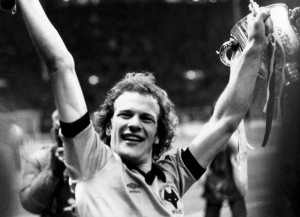 Andy would have been even more handy round Molineux a few years earlier.

A: During the 1970s, there were a lot of striker combinations, including, of course, mine with the Doog. It seemed to be the style of the day. Liverpool had Keegan and Toshack, Leeds used Clarke and Jones and, at Tottenham, there were Chivers and Gilzean. To be honest, I felt our partnership was as good as any – probably better in some respects because we had players of the quality of Dave Wagstaffe and Kenny Hibbitt supplying us. When he came on the scene at Aston Villa, I was very impressed with Andy Gray; brave, strong, able to score goals. He was a revelation and a player you would love to have in your side. I know we eventually teamed up at Wolves but, by then, both of us were carrying chronic injuries, which meant we were never at our best together. I reckon if Andy and I had teamed up in our peak in the early to mid 1970s, we would have formed quite a partnership. The other striker I felt was as good as anyone was Martin Chivers. For a big lad, he was extremely skilful and always caused us problems. He was a top-quality player.

Q: You scored 194 goals for Wolves – which are your three favourites? (From SanFranWolf)

A: I’m regularly asked about my favourite goal but not the top three. My favourite was the winner in the League Cup semi-final second leg against Norwich in 1974. It wasn’t the most spectacular by any means – a typical flick on from Doog, which I chased and hit under the goalkeeper’s body. But it meant we had reached the final at Wembley and that was the dream of every footballer in the land. We had suffered the disappointment the previous season of losing in the semis of both the League Cup and the FA Cup, so this was a special moment. The other two at the top of my list are the winner in that 1974 League Cup final (obviously!) and the first goal of a hat-trick against Everton at Molineux in 1973. That one was a bit more than my normal tap-ins. I took a cross from Derek Parkin on my left foot on the edge of the area, touched it to the side and hit it on the volley with my left foot. It went past Gordon West into the top, far corner of the net. Quite a good one.

Q: I remember once reading that there was a great reliance on long-distance running during training. How does this compare with the training techniques employed now? Are players training for the same game now? (From IrchyWolf)

Q: A lot has been said about the gulf in standards between today’s Premier League and the First Division in your day, ie that the football is faster and players more skilful and fit. Do you subscribe to this view? (From Singwolf)

A: Two questions along the same lines, so I will deal with them together if I may. I’m not sure I’m knowledgeable enough about today’s training to be able to answer the first one. I assume there would definitely be some emphasis on stamina training, even nowadays, and that would include long-distance running. To be able to run around for 90 minutes, at the pace they do, the players need a lot of stamina. That can’t be generated from gym work alone or five-a-side games. It can only be developed with distance running and other running routines. 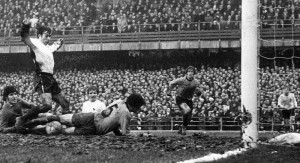 The Baseball Ground in 1971.....how would today's players have fared in that mud?

I have to say that the standard of play nowadays is far higher than in my generation. The game’s a lot quicker, which is mainly as a result of the increased fitness of the players. Training techniques have improved, dietary advice and medical treatment have changed totally. In my early days at Wolves, our pre-match meal was steak, and a cartilage operation could keep you out for six to eight weeks. The improvements have been massive and that is reflected in the quality of the play. In line with that comment, however, I have to add that the pitches have contributed to the improvements. Grass on the pitch throughout the season is the norm now. We had to play in mud, snow, ice and, in some cases, a combination of all of them!

Q: You can take two players you played with, to join you in the Premier League this season. All of you are magically at your peaks. Who do you take and why? (From Oldgold)

A: Great question. I was very fortunate to play with some top-notch players, so, as you can imagine, trying to pick out just two has been extremely difficult. The first, however, has to be Mike Bailey. There wouldn’t be any argument about this selection from any of the players fortunate enough to be in Mike’s teams. He is the best captain Wolves have had in the last 40 years. In many ways, Mike was underrated but those who played alongside him and against him for that matter would vouch for the impact he could make on any game. He was a fantastic tackler, had great stamina, could control a game and, in his own quiet way, would keep everyone focused on what they had to do. Most Wolves fans will have seen a recording of the 1974 League Cup final – have a look again and just count the number of tackles Mike makes, how he dictates the midfield against some world-class opposition. The perfect captain and definitely my first choice to join me in today’s Premier League. 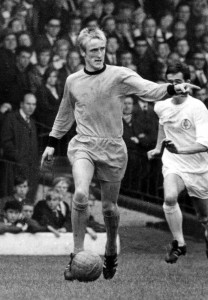 'Squeak' burns off the challenge of Kenny Hibbitt's brother Terry.

For the second one, I had a lot more deliberation. Hibby, Andy Gray, Doog, Waggy, Big Frank – all, at their peak, were awesome players and all easily able to star in today’s Premier League. In the end, I’ve gone for Derek Parkin – a quality player who played at left-back, although he was a natural right-back. He had so much natural ability, he could have played anywhere. Derek was also a born athlete, able to run all day, and he could hit a ball well with either foot. He was quick, a great tackler and even knocked in the odd goal. Actually, I can’t think of any weakness in his game, which is why he is my second choice.

Q: What is it like having Kenny Hibbitt as a brother-in-law? (From RedFlagWolf)

A: Kenny isn’t my brother-in-law. We are related via our wives. Kenny’s wife, Jane, and my wife, Pam, are cousins. Because of this family relationship, however, and because we stayed at Wolves so long, we did spend a lot of time together in the seventies and became very good friends. We still are. If I have one criticism of him, it’s that he is too good at golf. He’s a natural, plays off scratch and makes it look so easy. He always has done. While the rest of us were hacking in and out of the rough, Kenny was drilling his ball down the middle of the fairway. It’s all very unfair but, in his defence, I have to say he is one of the nicest people you could ever wish to meet. He loves meeting fans and talking about games. In fact, give him a pint and someone to talk to about football, and he’s in his element. A great lad.

Q: Why Wolves? You were born in Warrington and there are a lot of clubs in the north west, so what was the attraction of Wolves, and did you have trials at any other clubs? (From andy-in-seat-190)

A: There was no interest in me from any of the north-west clubs when I was playing in local football up to the age of 18. Warrington is a rugby league town, so perhaps scouts didn’t place too much emphasis on it. The only interest in me came as a result of a schools football tournament in which I was playing in the Easter of 1969 – and that was in Bognor! I was selected for the England Grammar Schools team. As a result, I was approached by a number of scouts. Wolves were the first and I was invited to play in the last reserve game of the season. Other clubs came to talk to me, including Derby County and Sheffield Wednesday, but I had been impressed by Molineux and the chairman John Ireland. After the reserve game, he came and congratulated me on my performance and asked me if I would like to play for Wolves. The rest, as they say, is history. I came to Wolverhampton on a one-year contract and, 40 years later, I’m delighted still to be here.