Mike Up Close With Wolves Fans 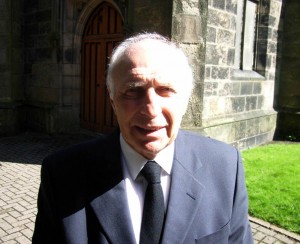 Mike Bailey’s visit back to the West Midlands last week didn’t end with his induction to Wolves’ Hall of Fame.

The club’s inspirational long-time former captain returned to Molineux for the Premier League game against Wigan two days later and even turned heads by showing up at a pre-match meeting on the way.

“I was given a real supporters’ day,” Mike told Wolves Heroes today. “I was with Chris Cox, from Daventry Wolves, and he took me along on the Saturday lunchtime to a meeting of the Fans’ Parliament, which he’s a member of.

“Then I was surrounded by gold shirts when we went from there for a drink in the Great Western pub before the match.

“Willie Carr was in as well because we were both going on the night to Daventry Wolves’ annual dinner, so they made quite a fuss of us all round.

“Daventry Wolves have a block of about 60 seats in what I still call the North Bank and I sat in there for the first time in my life. 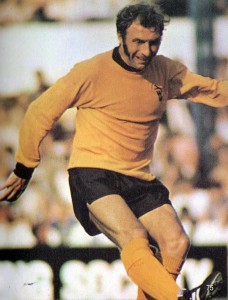 The skipper in his prime.

“The ground is obviously very different to the one I remember as a player but it’s a terrific view – and the only disappointing part of the few days was the result against Wigan.

“I get back to Molineux a few times a season but normally sit in the main stand, as I did when Derek Parkin, Phil Parkes, Frank Munro and myself were invited to the Bolton game in December by Bob Laslett from Chaucer.”

London-based Bailey, who played 436 Wolves matches from 1965 to 1977, also watches the club when they are in the capital, although the scarcity of away tickets for Premier League matches is making that harder this season.

And there is one other curious link with his Molineux past – the Christmas card that passes between he and Bobby Gould every year.

It was Bailey’s turn to send it this December, the inside having just enough white space left for a witty message from him to a man he took with him to Hereford in the late 1970s during his first managerial appointment.