How The Major Shamed Cup Flops 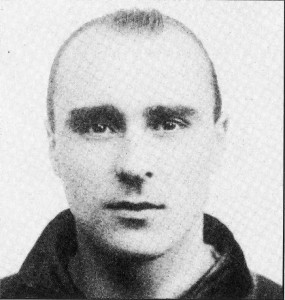 Ted Watson in his Molineux hey-day.

Part five of our Way Back When series carries a topical theme and might have Wolves’ present-day players thanking their lucky stars!

Disappointed that Wolves didn’t put Crystal Palace away at the first attempt in their FA Cup meeting at Molineux yesterday?

Mick McCarthy’s mood, it would appear, was much lighter than that almost 80 years ago of one of his predecessors, Major Frank Buckley, after a third-round knockout against Mansfield.

We are grateful for the following information from one of our readers, who reflects on how the Major apparently reacted following  a 1-0 defeat at Molineux in January, 1929, against a side who weren’t even elected to the Football League until a couple of years later.

“Ted Watson, the old Geordie full-back, was my Granddad’s best pal and a work-mate at Marstons in Fordhouses,” the reader’s email says.

“Ted also worked as a barman at the Mitre pub in Bradmore and his nickname, in his playing days, was Clagger Watson.

“He told me they (Wolves) lost an important Cup match to Mansfield and Major Buckley made them turn up on the Sunday morning and put their strip and boots on.

“He made them run round the town on the cobbles.” And the reader’s last word via his Granddad was: “He said the language was worst down Brickkiln Street.”

Thank Goodness then for Ronald Zubar’s late equaliser yesterday! But what else of Watson, who didn’t play in that humiliating tie, but returned against Tottenham the following week?

He was a defender, described as a fearsome tackler, who moved from the north-east to South Wales and arrived at Molineux in 1921, ironically a few weeks after they had lost to Tottenham in the FA Cup final.

He made 206 first-team appearances for the club, then played more than 100 times for Coventry before ending his career with Oakengates Town in the mid-1930s. 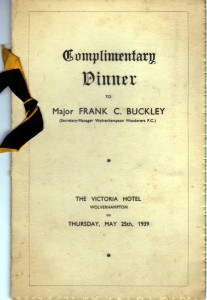 The honouring of a Wolves icon just before the war.

The year of his passing-away is not known but the statistics that earn him a place in the Legends area of this website obviously don’t tell the full story of a colourful individual.

“I remember him telling me he was walking his dog once in Bantock Park,” we are also told. “There was a football match taking place and the keeper shouted to him to tap the ball back.

“He (Ted) was in his 60s but thought ‘I’ll show him’ and let fly a piledriver which hit the keeper, who was astonished at his power.”

* Author and journalist Steve Gordos adds: “My dad remembered this game and said Mansfield were dubbed ‘the egg and milk team’. Their manager Jack Hickling claimed that, at training each day, the players took a special drink made of eggs and milk. There was a lot of attention on Mansfield at the time as they were drawn against Arsenal after beating Wolves. I always believed the story to be true but apparently Hickling admitted many years later he had made it up just to give the Press a decent line.”