Tales Of A Super Sunday 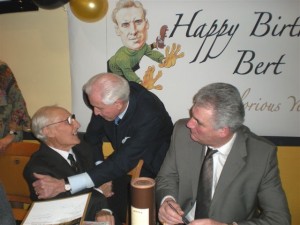 Bert (left) is congratulated by Peter Bonetti, as Phil Parkes looks on.

I’ve been to a lot of birthday parties, which is not surprising at my age, but the one I went to yesterday beats all others hands-down.

Two hundred (yes, two hundred!) guests were at Molineux to celebrate with one of Wolves’ and England’s most famous footballers, Bert Williams.

It was the day Bert turned 90 and, in addition to his family and many long-standing friends, there were dozens of famous football folk and local dignitaries.

The inspiration behind the party was one of his good friends, Glyne Wetton, also the instigator of his excellent book,  The Cat in Wolf’s Clothing. He must have spent months pulling the whole thing together and what a great job he did.

Bert himself was expecting a bit of a get-together with immediate family and a few friends and his jaw dropped when he saw the packed Hayward Suite festooned with balloons and huge posters of him. It dropped even further when he was taken into a room to be greeted by around 20 former Wolves players, including Ron Flowers, Roy Swinbourne, Phil Parkes, Fred Davies and Steve Bull. There were also a couple of special invitees, fellow goalkeepers Gordon Banks and Peter Bonetti.

The surprises didn’t stop there. The BBC, in the form of Ian Winter, were covering the event, together with the Express & Star, who were represented by their leading sportswriter, Martin Swain. I know it was work for them but they both admitted they considered it a privilege to have been asked along.

In the main room, among the guests waiting to greet Bert, were Lord Dennis Turner of Bilston (apparently, Bert and he were near-neighbours in Bradley), Robert Plant, World Cup Final referee Jack Taylor and Wolves vice-president Rachael Heyhoe-Flint. Quite a line-up!

Many had travelled from distant parts of the country and one from abroad (a lady from Budapest who is a relative of the great Puskas) to join the celebrations.

And they all said the same thing – what a wonderful man Bert was and how they wouldn’t have missed the day for the world.

The festivities included an auction of items, among them an oil painting of Bert and a guitar donated and autographed by Robert Plant. All the proceeds are going to the Alzheimer’s Society.

A raffle in the same cause raised £2000 and Sludge Lees provided the entertainment, with Gordon Banks giving the main vote of thanks to Bert.

Glyne told more than a few tales about many people in the room, Bert quietly thanked us for being there and then listened to his two sons, Paul and Vaughan, telling us all about their competitive dad and how he used to beat them even at cards. 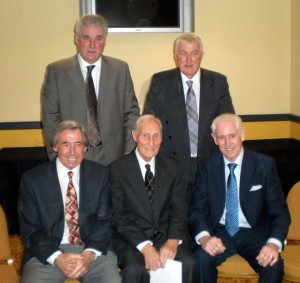 Bert’s grandchildren and great grandchildren somehow kept themselves entertained for the full four hours – no mean feat in the case of the three and four-year-olds.

It was everything you could want from any party – wonderful company, emotion, sentiment, lots of reminiscing and lots of fun. The sort of party deserved by one of the nicest people you could ever wish to meet.

I’m already looking forward to the next one in ten years’ time!