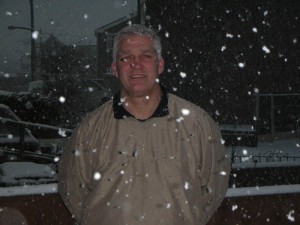 Peter Zelem pictured during the recent freeze - isn't Manchester meant to be more famous for rain?

It hasn’t been a kind winter but the Siberian temperatures have been worse for self-employed window cleaners than for most.

So spare a thought for Peter Zelem, the 1980s Wolves defender who has spent more time than he would have liked in hibernation during the recent cold snaps.

Resident not far off that exposed stretch of M62 between Manchester and Oldham, the burly former centre-half has been more relieved than most at a return to milder weather.

“We were snowed in up here for ages,” he said. “We live out in the sticks, a couple of miles from the nearest shops, so we did a lot of walking because people just couldn’t get their cars out.

“Obviously, things were wiped out work-wise as well. I normally tell people that moss and dew are more of a worry to window cleaners than ice is but it was so bad this time that we couldn’t even think of going up a ladder.

“I’ve had a couple of falls in the past and was off for six weeks once when I injured my ankle ligaments. I’ve also had stitches in my hand and elbow. I’m 14st, so that body weight can cause some damage when I slip off!

“These three months are the worst of the year because of the cold but I generally like the freedom the job gives me. I went into it at 28 when I finished playing football and thought I’d do it for a year or two. I’m just coming up to 48 now and I’m still involved.

“What with playing football and now being out and about meeting people, I sometimes don’t feel as though I’ve ever had a proper job.”

Zelem is in business with his brothers but retains a link to the sporting world with his son Ross playing cricket for Lancashire Schools and the North of England age-group side.

And, since a succession of injuries hastened his own retirement after post-Molineux spells with Preston and Burnley, he had the thrill of watching his twin brother Alan keep goal for Macclesfield in the 1989 FA Trophy final against Telford at Wembley, albeit in a 1-0 defeat. 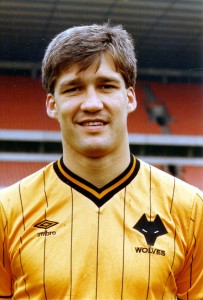 Peter was signed for Wolves from Chester by Tommy Docherty in January, 1985, and played 54 games in just over two years before being moved on by Graham Turner.

“He told me I wasn’t part of his plans,” Zelem added. “I went on to Burnley and played in a few of the earlier games in their 1987-88 Sherpa Van Trophy run.

“Unfortunately, though, I was in a collar and tie on the day of the final against Wolves. I didn’t get close to playing.”