Wolves On Tour – With A Difference 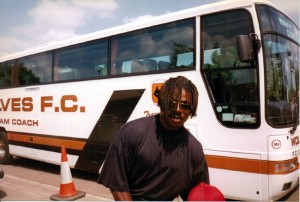 Tony Daley, now Wolves' fitness coach, shows he is all geared up for the Kent sunshine 15 years ago.

Wolves Heroes’ substantial 2010 increase in activity goes a step further tomorrow when we post a new Tours Are Us feature.

ALOB’s Jim Heath, one of an growing number of contributors to this site, has delved into his memory bank to pen a piece from a summer in which supporters flocked in unprecedented numbers to watch Wolves on a pre-season trip.

The reason for the large turn-out? Following several years of travel to Scandinavia, Wolves had a stay-at-home warm-up for the 1995-96 campaign.

Wolves, with several big players coming back from injuries, played matches against non-League sides in Buckinghamshire and Kent before taking on more recognised opposition back at Molineux.

It was an undemanding trip with a difference that brought two victories and many more goals by way of an appetiser for the serious business ahead.

At times, the relaxed atmosphere conjured up thoughts of summer sports rather than football as Wolves and their fans went to venues they hadn’t visited previously – and haven’t since.

Jim Heath, having also contributed an excellent account of the famous ‘Los Angeles Wolves summer’ of 1967,  is a world traveller as well as a long-time member of the gold and black masses.

He even delivered to us some snaps, like the one above, of the 1995 adventure. See more of them and his extended write-up tomorrow.