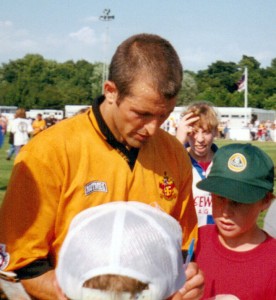 The pre-season of 1995/96 saw Wolves eschew the glamour (and presumably expense) of an overseas trip as they embarked on one of the most low-profile preparations the club had undertaken in the modern era.

As a marked change from the norm in that decade, Graham Taylor chose nothing more exotic than a visit to two non-League clubs in the Home Counties of Buckinghamshire and Kent.

Failure to capitalise on a fabulous start to the previous campaign had seen Wolves’ promotion dreams ultimately lying in tatters on an acrimonious night at Burnden Park, where they suffered a miserable play-off semi-final KO which left them licking their wounds during an equally low-key summer.

This was in stark contrast to those of 1993 and 1994, when the likes of Geoff Thomas, Kevin Keen, David Kelly, Neil Emblen, Steve Froggatt and Tony Daley were all signed and sealed before pre-season training commenced.

This time, the main focus at Molineux was not on the quality of new arrivals but the possible dramatic departure of fans’ hero Steve Bull.  With Coventry manager Ron Atkinson offering £1.5m, the decision was ultimately left with the striker on whether to take this opportunity of playing Premier League football.

Thankfully, amid huge sighs of relief, Steve Bull was part of the squad who journeyed south to take on Amersham Town on a balmy Thursday evening a couple of weeks or so later. Also included were long-term injury casualties John de Wolf, Daley, Thomas and the little-seen Neil Masters. 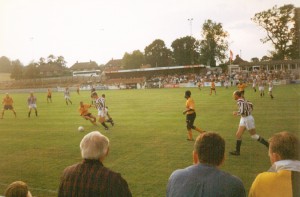 Amersham v Wolves at Chesham. Not your normal match-day setting.

Amersham could boast Graham Taylor as club president – a relationship that developed when he was manager at nearby Watford – but not much else. Lying in the nether regions of the pyramid, they struggled in the Spartan League Premier Division the previous season (a regional feeder league to what is now the Ryman League) and used the modest surroundings of neighbours Chesham Town to host this prestige friendly.

A strong Wolves line-up contained Andy de Bont in goal and blonde Dutch trialist David De Jong in midfield while Amersham were bolstered by St Albans striker Barry Blackman, who had the reputation for being one of the hottest goal-scoring properties in non-League.

Blackman also attracted the interest of Portsmouth and Coventry, and a fee of £150,000 was being talked up by his home club for a player who was due to join Wolves on a short trial after the tour.

Not surprisingly, the match was pretty much one-way traffic and Wolves opened the scoring through Andy Thompson in the 13th minute, with a brace from Bull following before the interval.

It was good to see Daley back in action and he saw a lot of the ball during a full 90-minute work-out – his first meaningful football for eight months.

Five changes were made at the break, including the welcome return of De Wolf, who had clearly not fully recovered from a serious knee injury as he wore a rather worrying leather protective brace.

To add to the ‘jumpers for goalposts’ feel of the match, Blackman switched sides (replacing Bull), but it was not until the 64th minute that Wolves added a fourth and then went on to score an astonishing seven more before the end.

Never since have they hit double figures in the UK and the 500 or so visiting fans in the 1,000-strong attendance were content enough at witnessing this curio. Blackman could also claim his 15 minutes in the sun, scoring for Wolves before withdrawing with an injury. Sadly for him, a move to the professional game never materialised. 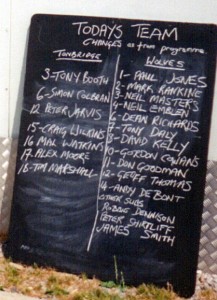 After warming up with 11 goals, the squad moved on to Kent for a couple of nights at the Pembury Resort Hotel before setting foot in the pleasant surroundings of Longmead Stadium, the home of Tonbridge Angels.

This Saturday 3pm fixture, played under clear blue skies, was going to be a much sterner challenge as the Angels were just a couple of rungs below the Football League and the bone-dry pitch looked bare and slightly rutted. The hospitality was excellent, though, with the clubhouse making the healthy Wolves contingent welcome and the Angels having Neil Emblen’s dad, Phil, as their manager and his younger brother, Paul, lining up in their side.

It was altogether an intimate affair for the 1,446 crowd, many of whom were lazing on the touchline enjoying the sun. All that was missing was the iced pimms and the sound of willow on leather!

Wolves started with Bull, David Kelly and Don Goodman operating together up front and winger Daley further echoing the attacking bravado Taylor had shown in the previous season. However, even with this substantial battalion, Wolves couldn’t force a breakthrough in the first half, which was scrappy as Tonbridge competed on equal terms.

As the temperature dipped in the second half, Wolves turned up the heat and goals from Bully, Kelly and, to cap it all, skipper-for-the-day Emblen (a splendid 20-yarder) wrapped up a 3-0 victory.

In the following two weeks, preparations stepped up with prestige Molineux friendlies against Manchester City (won 2-1) and Arsenal (lost 2-0). But, three months into the season, Taylor had been sacked and Wolves finished a disappointing season in 20th place, just three points above the drop zone to the third tier. 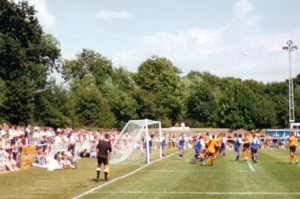 Wolves on the attack at Tonbridge.

Mark McGhee was by then in charge and told his players to make sure their passports were up to date for his first pre-season…….

* As the new Wolverhampton Wanderers Complete Record does not carry the details of the matches on this tour, we are happy to do so.

Jim Heath is a long-time contributor to A Load Of Bull and remains a valued supporter of Wolves Heroes.