Have Sponge, Will Travel! 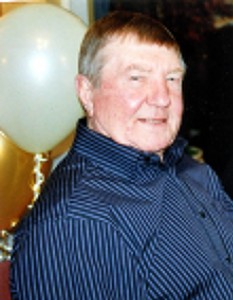 A family photo of George Showell in recent times.

But anyone running away with the idea that his football career petered out from the day he left Molineux would be wrong. He still managed to plant some sizeable imprints on the game.

He was responsible for a piece of pure West Country trivia as he went on for John Atyeo at Manchester City in August, 1965, and became the first substitute ever used in a League game by Bristol City.

And, for all of the greatness he lived through and contributed to with his home-town club, he actually had a much fuller taste of European football when he was with Wrexham.

The dependable defender played in all of the six games that contributed to Wolves’ run to the last eight of the European Cup in 1959-60, namely two-leg ties against Vorwaerts, Red Star Belgrade and Barcelona.

And he played away to FK Austria and home and away against Rangers when Stan Cullis’s side competed in the European Cup Winners Cup as FA Cup holders in 1960-61.

But that valuable experience was dwarfed, in frequency if not by the magnitude of the matches, by the journeys he made across the Continent with his last League club.

Showell followed his spell in Bristol with a 22-year stint at Wrexham, initially as a player and then in a variety of off-field roles such as assistant manager, caretaker manager and, for the most part, physio.

“I never played in Europe for Wrexham but I went on loads of trips with them,” he said.

“To someone like me who enjoyed travelling, it was a perk that they played in the Welsh Cup and often qualified for the Cup Winners Cup through it.

“We lost to Anderlecht in the quarter-finals one year and also went to Zaragoza and Zurich, as well as facing Swedish and Polish clubs I’ve forgotten the names of!

“I don’t remember us ever being knocked out in the first round either. We usually put a run together of some sort.” 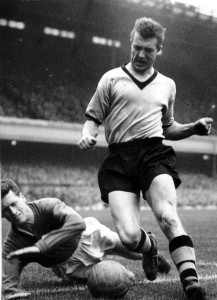 A determined Showell in action for Wolves at Highbury.

Hajduk Split, Porto and Sven-Goran Eriksson’s Roma were other eye-catching assignments during the Racecourse Ground career of a man who put down such roots in the North Wales town that he and his wife have now lived there for well over 40 years.

And he could have been higher-profile still in his neighbourhood. Before going on to work as physio for the local rugby club and as a pharmacy porter at Wrexham Maelor Hospital, he was sounded out about becoming manager, only to decline out of devotion to his ‘sponge man’ duties.