Crowe – A True Star Of Ireland 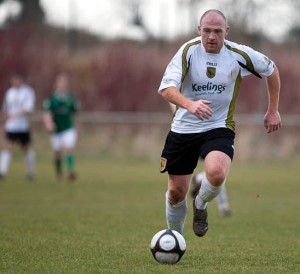 Glen Crowe in action for Sporting Fingal in a pre-season friendly this winter. Picture courtesy of Paul Walsh Photography (www.photography.paul-walsh.net)

For making you feel old, there’s nothing like the realisation that a player you recall as a raw teenager is now approaching veteran status.

The striker burst into the consciousness of Wolves fans when he marked his first senior start by lashing in a spectacular equaliser at Charlton on the final day of the 1995-96 campaign.

It was the only goal he managed in his ten first-team appearances – all under the management of Mark McGhee – but much has happened to him since.

Having gone on loan to Exeter and Cardiff, he was in Plymouth’s side  the day goalkeeper Jimmy Glass made history by scoring the last-gasp winner that kept Carlisle in the Football League.

And he has written many headlines of his own since returning to his native Ireland.

He is the all-time leading league scorer at Stephen Ward’s former club Bohemians with 133 goals and has also netted more goals in European competition (10) than any other Irish domestic player.

On top of that, having twice been drafted into Mick McCarthy’s Republic of Ireland squad without being used, he became the first League of Ireland player in 16 years to be capped for the country when he faced Greece and Norway in friendlies.

At club level, the honours simply piled up. In two spells, he totalled four League titles with Bohemians and, in between, won a champions’ medal with city rivals Shelbourne.

And, in the forthcoming Irish season, he will be hoping for good times at Fingal with manager Liam Buckley, a man who made his Republic of Ireland debut in the same game that McCarthy was first seen at that level.

“Glen is a proven goalscorer and I believe he’ll add quality to our group,” Buckley said. “There are not many full internationals in the domestic game and he has gained considerable experience at the top end of our premier division over the decade.

“Our success in the First Division and FAI Ford Cup last season was built around a mainly young squad and a player of Glen’s calibre will be a positive influence in developing the team further.” 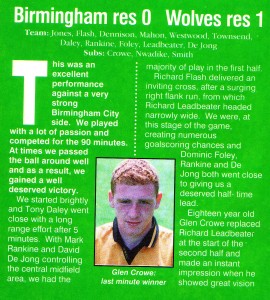 How the young Crowe was featured in Wolves' programme in the mid-1990s.

Crowe is embracing the challenge of linking up with one of the League’s newest clubs and said: “I had ten great years at Bohemians and Shelbourne and feel just as excited about being a Sporting Fingal player.

‘I don’t see this as a step backwards. The improvements made by Sporting Fingal in two years, not just on the pitch but also off it, proved to me they are a club with a solid foundation and are on the up. I’d noticed that the club are working hard around North Dublin to create links with the community, including the area where I grew up in Blanchardstown in Dublin 15.”