All Stars Aid The Haiti Effort 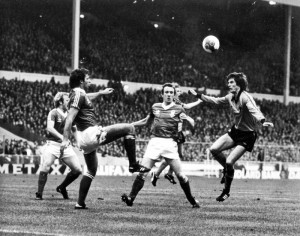 Wolves All Stars are back in action this Sunday – in a game being staged in aid of the Haiti Earthquake Appeal.

Player-manager Mel Eves and his side head for Cradley Town’s ground in Beeches View Avenue, Cradley, for a 12 noon kick-off against the People Plus/Minivator United team.

Admission is £1.50 and former Molineux favourites will be mingling with spectators as well as going through the pain barrier once more!

“The problems with fielding a side for a game like this is that many of the lads will be in their 40s and that brings its own problems,” Eves said.

“We all know that you’re likely to pick up knocks and strains more easily later in life, so it will be later in the week that we can start to finalise our line-up.

“But I’d hope there will be quite a few players who are fondly remembered by Wolves fans and we are again likely to lean on a couple of outsiders – Chris Marsh, who was a very popular figure at Walsall, and John Williams, who played for Cardiff and Swansea as well as Coventry.

“And it’s a terrific cause – something that has touched everyone’s hearts – so we hope people will make an effort to turn out and support the game.”

Stan Cullis’s Wolves visited Haiti as part of a lengthy end-of-season tour of the Caribbean 46 years ago. 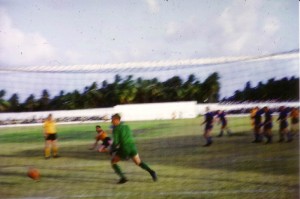 A through-the-net view of Wolves and Chelsea in opposition in the Caribbean in 1964 - a trip that took in Haiti.

They played twice in the capital, Port Au Prince – the city that has tragically been in the news in recent weeks – in early June, 1964, drawing with the island side 1-1 thanks to a Terry Wharton goal and then losing 2-0 to Chelsea.

Wharton and Barry Stobart are among the survivors of that trip who have lined up in the past for the All Stars.

Sunday’s game is the first of several charity games the side have lined up between now and the end of the season.

The All Stars’ opponents are made up of eight employees from People Plus Recruitment, who operate out of Chapel Ash, Wolverhampton, and eight from their biggest customer, Kingswinford-based Minivator Limited.